What Happened Last Week: Harvard did what Harvard does in tournaments. Santa brought blowout wins for Princeton and Dartmouth, overtime heartbreakers for Brown and Penn, a blown first-half lead for Cornell, and rest for Columbia and Yale.

1. Given how it plays overseas, Harvard might want to consider moving its new arena to the satellite campus in Shanghai. After sweeping the Battle 4 Atlantis (Bahamas) in 2011 and the Great Alaska Shootout in 2013, the Crimson extended their win streak outside the contiguous U.S. to eight games with victories over BYU and Auburn in the Diamond Head Classic. In the final, they led No. 3 Oklahoma at halftime, fell behind by 20 when the Sooners caught fire, and then closed three-quarters of that gap before losing 82-71.

Harvard followed its playbook: Defense, post play, and outside shooting. Zena Edosomwan had a monster tournament (see below), and the Crimson shot 42% on threes: 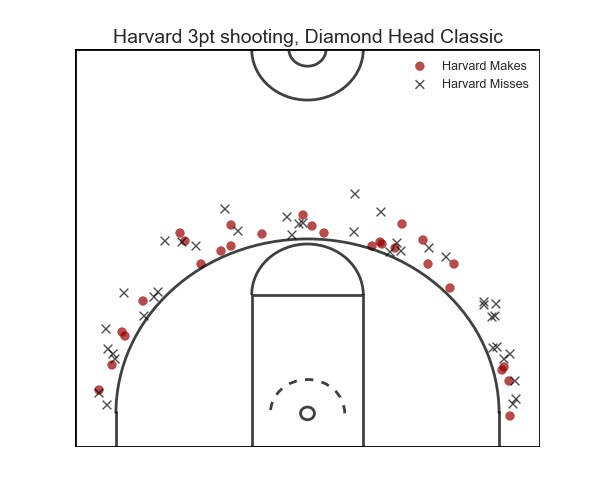 Earlier in the year I thought Tommy McCarthy, as the team’s only natural point guard, would make or break Harvard’s season. But that hasn’t been the case — the rookie was in frequent foul trouble this week, but the Crimson didn’t miss a beat, outscoring Auburn by 17 points without him and playing Oklahoma even. Lineups with Corbin Miller, Corey Johnson, Agunwa Okolie, Patrick Steeves and Edosomwan looked particularly fearsome, with three sharpshooters around one center, Okolie’s tough on-ball defense, and length at every other position.

Harvard’s offense won’t look this good when Edosomwan is in foul trouble, three-pointers don’t fall, or turnovers accumulate. But the Crimson have shown this month that they’re a legit Ivy League contender alongside Yale, Princeton and Columbia.

2. Don’t look now, but Princeton has crept into the top 100 teams nationally in KenPom’s adjusted tempo at 71.4 possessions per game. The Tigers never ranked above 300 before 2012; but Mitch Henderson has liberalized the Princeton offense, giving his players freedom to attack off the dribble early in the shot clock. They used a lot of quick-hitting drive-and-kicks against Bucknell, making 10 three-pointers and scoring 48 points in the paint. All told, the hosts scored 89 points on 73 possessions, winning comfortably despite a sloppy defensive second half.

The Ivy League and Patriot League are common non-conference foes, but this year’s fight is a mismatch: After Princeton’s win last Tuesday, the Ancient Eight is winning the series 9-3, outscoring their opponents by 12 points per game. The main culprit is the Patriot League’s porous defense, which has allowed 80 points per game to Ivy teams.

3. Cornell got off to a strong start against mid-major darling du jour Monmouth, leading 23-10 after 10 minutes and sticking within one possession into the final seven minutes. But turnovers killed the Big Red — especially with three starters in foul trouble — and the Hawks used second-chance points to pull away.

Player of the Week: Zena Edosomwan, Harvard — Edosomwan had 23 points and 17 rebounds in Harvard’s overtime win over BYU, and 13 and six against Auburn, but he saved his best work for the final: 25 points, 16 rebounds and two assists against the nation’s #7 defense (per KenPom). Edosomwan has become much more effective on offense — he has more assists than turnovers, a far cry from his 1:4 ratio last year — and has cut his foul rate, allowing him to play full games. The junior is averaging a double-double for the season and on track to be a legitimate Player of the Year candidate.

Rookie of the Week: Corey Johnson, Harvard — Johnson was recruited with a reputation as a pure shooter, and that’s what he’s been for the Crimson. The Ottawa native shot 4-9 from three-point range in the first two rounds of the Diamond Head Classic, then went 3-6 against Oklahoma while battling foul trouble. For the season, 82% of his shots have come from beyond the arc, and he’s made them at a 42% clip; only two Ivy players have made more treys.

The Week Ahead: Penn plays No. 17 Villanova tonight (FS1), and Princeton visits No. 13 Miami on Tuesday (ESPN3). Yale and Columbia return to action after long layoffs; the Bulldogs take short road trips to Central Connecticut State and Hartford, while the Lions tune up with Howard before traveling to Stony Brook. Also check out Brown vs. Rhode Island (Wednesday, ESPN3), and Harvard hosting Vermont (Saturday).