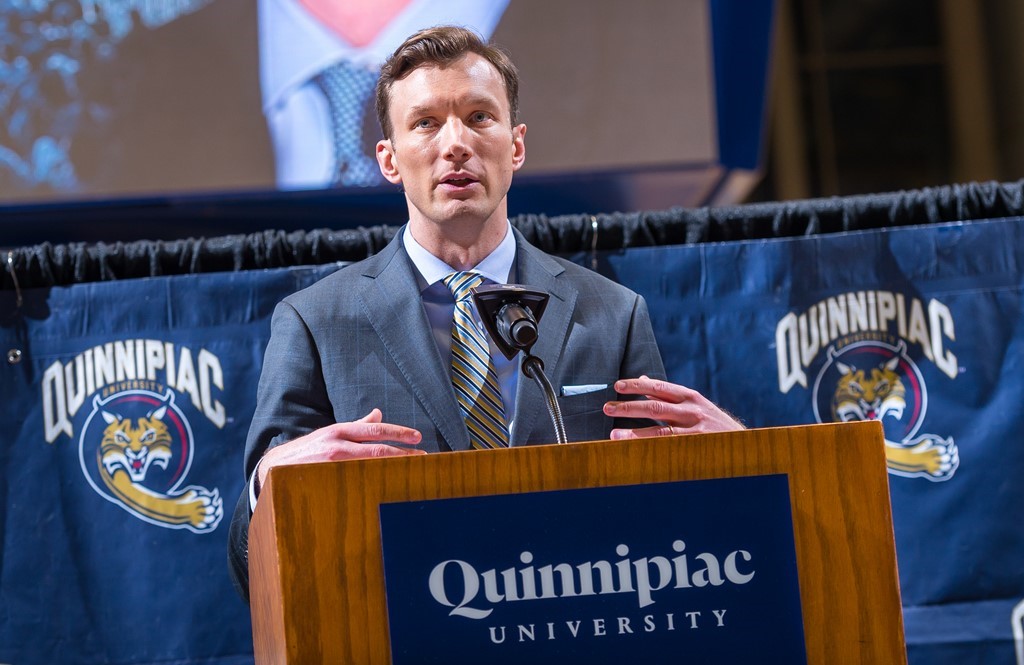 Outlook: A new coaching staff, a slew of fresh faces, and a handful of returners begin a new era of basketball in Hamden. END_OF_DOCUMENT_TOKEN_TO_BE_REPLACED

There have been plenty of changes at Quinnipiac over the past four months: new players, a new court, and of course a new coach. As Baker Dunleavy has settled into his new role taking over for Tom Moore as lead man in Hamden, his Villanova background has steadily taken root with the Bobcats. END_OF_DOCUMENT_TOKEN_TO_BE_REPLACED

Villanova associate head coach Baker Dunleavy has been tabbed as the new lead man at Quinnipiac, according to reports. END_OF_DOCUMENT_TOKEN_TO_BE_REPLACED 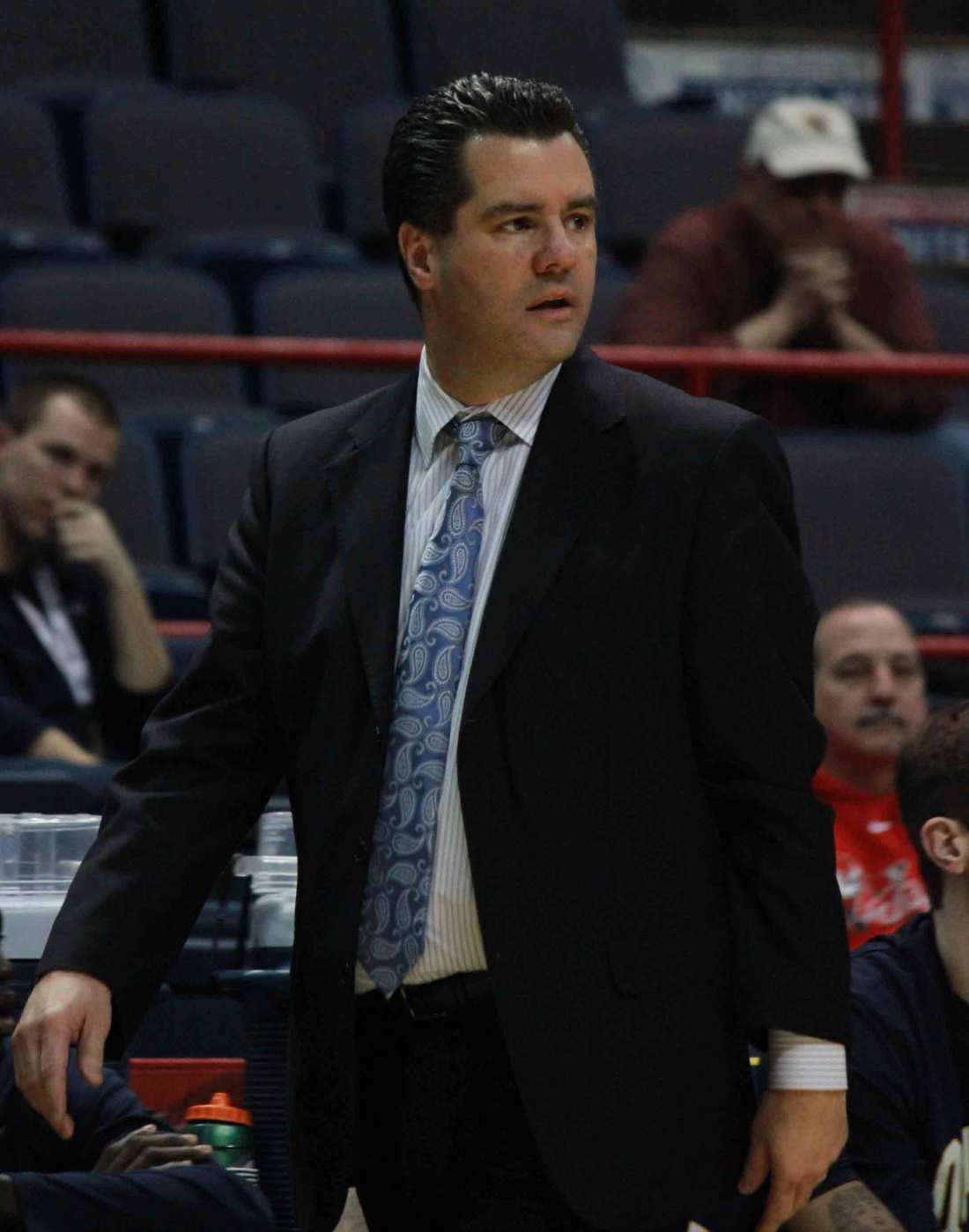 Quinnipiac severed ties with head coach Tom Moore Tuesday morning, firing the coach after his 10th season with the program, following the Bobcats’ first round loss to Niagara. END_OF_DOCUMENT_TOKEN_TO_BE_REPLACED

The MAAC handed out individual postseason awards Friday morning. Here’s a rundown of who took home the hardware: END_OF_DOCUMENT_TOKEN_TO_BE_REPLACED 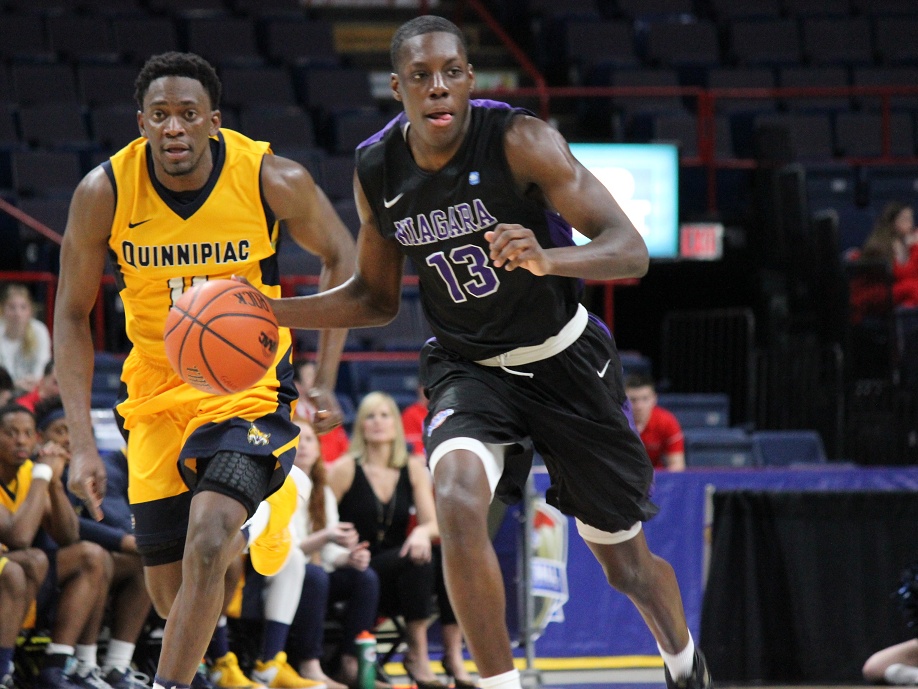 ALBANY, N.Y. — Someone had to end their losing streak, and it was Niagara who got the job done. The Purple Eagles took down Quinnipiac 88-69 in the opening game of the MAAC tournament Thursday evening at the Times Union Center. END_OF_DOCUMENT_TOKEN_TO_BE_REPLACED 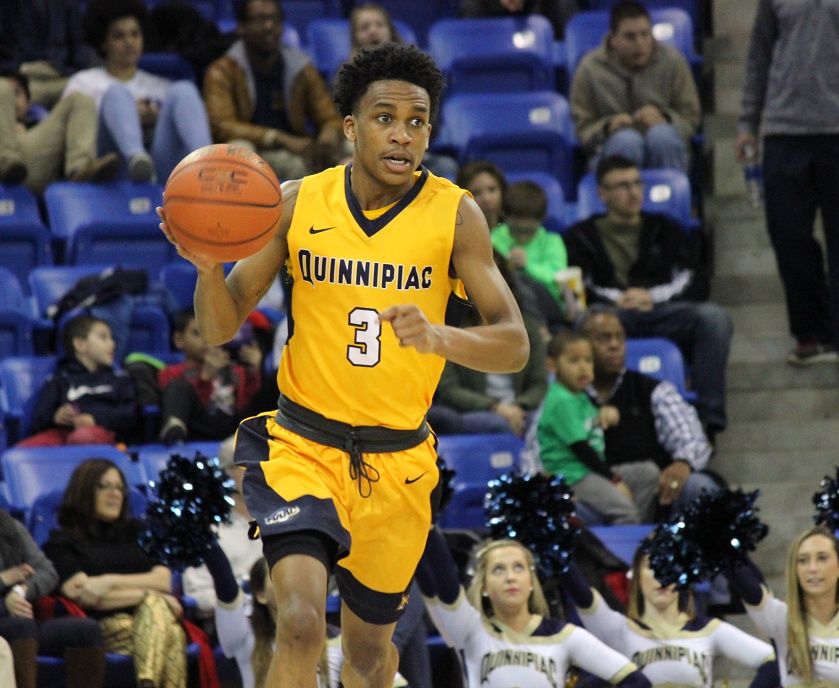 The Quinnipiac Bobcats won their first two contests of February to improve to 7-7 in league play and appeared poised to make a run for a first-round bye, but a six game slide from that point on to end the season has Tom Moore’s squad back in the first game of the conference tournament for the second year in a row. END_OF_DOCUMENT_TOKEN_TO_BE_REPLACED

To see how the final results compare to NYC Buckets’ preseason predictions, click here. Additionally, travel back to our midseason awards and see how the stretch run impacted those races.

Robinson, the leader of the Hawks and the league’s top scorer at 19.7 ppg, earned his third First Team selection and is the odds-on favorite to become the fourth MAAC player to repeat as Player of the Year this Friday. He would be the first to capture the award in consecutive seasons since Manhattan’s Luis Flores in 2003 and 2004. Teammate Micah Seaborn (13.5 ppg) also benefited from the Hawks’ impressive year, as the sophomore made the jump from Third Team a year ago to the top five this season.

Iona’s Jordan Washington joined Robinson as a unanimous selection with good reason. The senior forward established himself as the MAAC’s premier post player, ranking fourth in the league at 17.7 ppg and fifth with 7.5 rebounds per contest. Tyler Nelson led the way in Fairfield’s late push to capture a first-round bye, and was properly rewarded with a First Team spot. The junior ranks second in the league in scoring at 18.9 ppg and will enter next season as a favorite for Player of the Year honors. Quadir Welton rounds out the top five, and was the driving force behind Saint Peters’ run for the second spot in the league. The senior forward checks in at 11.8 ppg and 8.0 rpg, and helped the Peacocks become the league’s top defensive squad.

Saint Peter’s sees its second honoree in the form of point guard Trevis Wyche. The senior averaged 11.2 ppg and 3.8 assists per game while leading a surprisingly potent Peacocks offense which ranks fourth in Offensive Efficiency in league play according to KenPom.com. Marist senior Khallid Hart makes a repeat appearance on the Second Team after ranking third in the league with 18.0 ppg despite the Red Foxes’ disappointing season.

Kassius Robertson, who led the Golden Griffins and placed seventh in the league with 16.5 ppg, earned his first all-MAAC honor as a junior while Siena seniors Brett Bisping and Marquis Wright represent the Saints’ two all-league selections. Bisping nearly averaged a double-double with 12.2 ppg and 9.6 rpg while Wright solidified his role as Siena’s facilitator by averaging 4.9 apg and matched Robertson at 16.5 ppg.

Canisius’ second representative shows up on the Third Team in the form of Jermaine Crumpton. The junior helped lead the Golden Griffins’ early surge, and finished just behind teammate Robertson with 16.2 ppg but added an additional 4.9 rebounds per contest. Manhattan’s Zane Waterman became another to make his first appearance on an all-MAAC squad. With season averages of 14.5 ppg and 7.1 rpg along with three 20+ point performances to end the year, the honor is well-deserved despite the Jaspers’ last-place finish.

Niagara’s Matt Scott makes a return appearance on the Third Team after filling the stat sheet with 17.3 ppg (fifth in the league), 7.0 rpg, and 3.0 apg. For the second year in a row, Rider placed a pair on the final all-MAAC squad. Kahlil Thomas also repeats as a Third Team selection by nearly averaging a double-double with 14.1 ppg and 8.9 rpg, while Jimmie Taylor’s 15.7 ppg leads the Broncs, who closed the season on a three-game winning streak powered by an impressive offensive surge.

Quinnipiac’s duo of Mikey Dixon and Peter Kiss captured ten Rookie of the Week honors including the final eight of the year. Dixon (16.8 ppg) ranks sixth in the league in scoring and is on pace to break the all-divisions school scoring record of 16.7 set by Frank Berretta in 1979-80 at the Division II level, while Kiss (13.3 ppg) is on pace to break Rob Monroe’s Division I record of 13.0. Kentucky, St. John’s, and UCLA are the only schools in the nation to receive a higher combined scoring average from their top two freshmen.

Iona’s E.J. Crawford established himself as a valuable player on the wing of Iona’s high-powered offense and finished the season with 9.7 ppg while shooting 45% from behind the arc. The final two honorees displayed a penchant for sharing the ball: Stevie Jordan (11.5 ppg) leads the MAAC with 5.8 apg and became a critical piece of Kevin Baggett’s starting lineup amidst four seniors. Malik Johnson, recruited by former Canisius coach Jim Baron before his retirement, ranks fifth in the league with 4.2 assists per contest.

Manhattan sent off senior Tyler Wilson with a flourish. The Jaspers put up 56 second-half points and routed Quinnipiac 95-74 in their home finale at Draddy Gymnasium Sunday evening. END_OF_DOCUMENT_TOKEN_TO_BE_REPLACED