Albany, N.Y. – A.J. English flirted with a triple-double as Iona ran away from Canisius 73-55 in the quarterfinals of the MAAC tournament at the Times Union Center. END_OF_DOCUMENT_TOKEN_TO_BE_REPLACED

ALBANY, N.Y. – Canisius probably was extremely fortunate in the end, playing sporadic defense and failing to put away an undermanned Niagara team on numerous occasions, but deserve’s got nothing to do with it in March, and it will be the No. 7 Griffins that advance to play second-seeded Iona Friday night, as they survived No. 10 Niagara 102-97 in triple overtime.

Phil Valenti scored 33 points and added nine rebounds, including going 14-18 at the line, but he missed two free throws that might have given the Griffins (14-18) the win in the second overtime.

END_OF_DOCUMENT_TOKEN_TO_BE_REPLACED 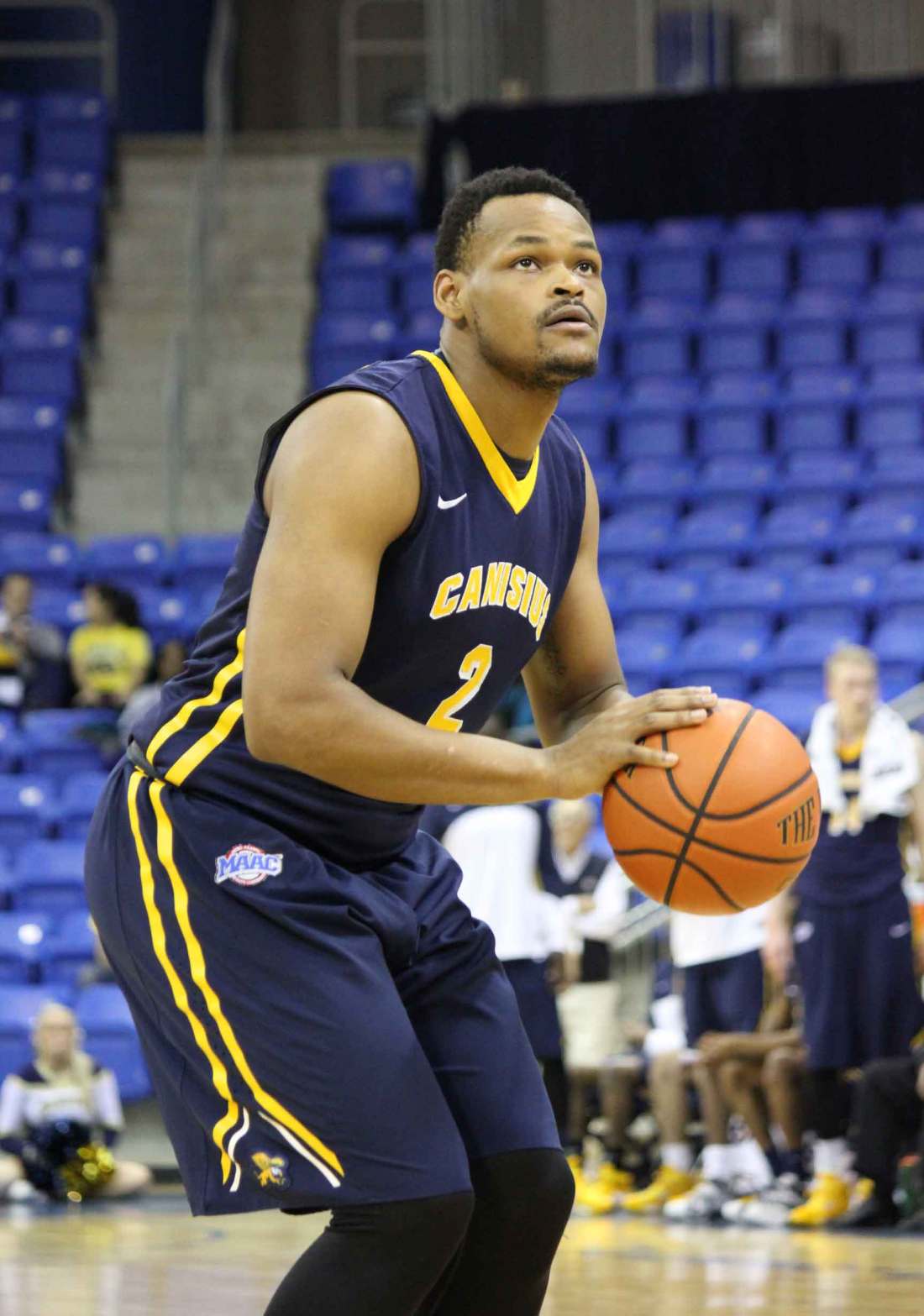 HAMDEN, Conn. – Tom Moore threw everything, including the kitchen sink in the form of a 1-3-1 at Canisius Sunday afternoon, but in the end, the story was the same, lots of missed shots in a frustrating 63-53 defeat, the Bobcats’ third straight defeat and sixth in seven games.

“We’re stuck in it,” Moore said. “More stuck in it than any other Quinnipiac team I’ve had here. We have resilient, tough kids, who are hurt and bruised by this offensive funk. But we have to keep working at it and we’ll eventually find ways to put a better offensive team on the floor.”

END_OF_DOCUMENT_TOKEN_TO_BE_REPLACED

To say that Canisius stormed out of the gates to start the 2015-16 season would be an understatement. END_OF_DOCUMENT_TOKEN_TO_BE_REPLACED 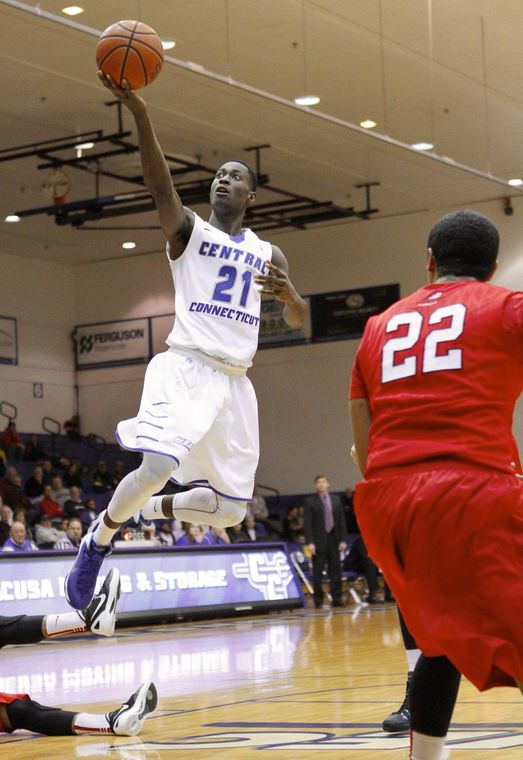 I’ve chimed in on a couple of major NEC transfers this offseason (Marcquise Reed here and Andrew Smeathers here), but during my brief hiatus from the blog I failed to address a few other significant defections. Allow me to catch up as I assess how the recent turnover may affect two programs that finished in the bottom of the NEC standings, Fairleigh Dickinson (FDU) and Central Connecticut (CCSU). END_OF_DOCUMENT_TOKEN_TO_BE_REPLACED

Howie Dickenman, at 68 years young, has been dealt some tough hands the last couple of seasons at Central Connecticut. This, his 19th at the table with CCSU, looked like it could hold some winning cards,none more valuable than his ace, senior Kyle Vinales, who was a first-team preseason pick and the leading returning career scorer in the conference.

But just two weeks before the regular season began, Vinales was arrested after an altercation with his girlfriend and subsequently suspended indefinitely. The Blue Devils lost their first seven games, and were down to just nine players in uniform with starting point guard (and another senior) Malcolm McMillan out injured heading into Saturday’s short drive to Hartford. They also learned earlier in the week that Vinales would not return, leaving school completely, ending his collegiate career on an unfortunate note.

END_OF_DOCUMENT_TOKEN_TO_BE_REPLACED

This is the seventh of 10 NEC previews before the season starts. You can find links to the first six at the bottom of this post. END_OF_DOCUMENT_TOKEN_TO_BE_REPLACED

Keeping the Legs Fresh Come February – 38.2. 37.2. 36.4. Those are the average minutes per game numbers last season for Kyle Vinales, Matthew Hunter, and Malcolm McMillan, respectively. Given the new defense rules and the overall depth of the conference, Howie Dickenman will need to scale back the playing time of the big three if the Blue Devils want to stay fresh late in the year. It’s the head coach’s hope that Khalen Cumberlander, who returns from a torn ACL, and newcomers Matt Mobley, Faronte Drakeford, and Juwan “Stretch” Newmen will bolster the depth, and allow for a more practical nine to ten man rotation.
A New Emphasis on Defense/Rebounding – The Blue Devils played an exciting brand of basketball for the 2012-13 season; in fact, their tempo was the fastest it has ever been (70.2 possession per game) in the KenPom era. Despite the up-tempo track meets though, CCSU was equally as inept at defending, allowing an unfathomable 108.2 points per 100 possessions. Obviously, the defense will need to tighten up, and Dickenman is banking on an improved presence in the paint. The additions of Drakeford and Newmen and another year of development from Brandon Peel give the Blue Devils’ defensive and rebounding numbers a chance to improve back to the mean. It can’t get much worse rebounding wise – the Blue Devils were in the bottom 50 nationally in both offensive and defensive rebounding rate.
Becoming More Efficient Offensively – Last season, CCSU bettered the national average for scoring by more than five points per game, yet that statistic is rather misleading. If you factor their tempo into the equation, the Blue Devils fell shy of scoring 1.00 point per possession. That mark was only eighth best in the NEC. The depth, once again, should help this cause, as well as a renewed sense of sharing the basketball. Dickenman has made it clear to Vinales that he needs to improve his shot selection and make his teammates better in the process. The team’s second leading scorer from a season ago, Hunter, has also looked more efficient shooting the basketball this preseason.

The Skinny:
CCSU wasn’t exactly a model of consistency last season. After losing to St. Peter’s two games in, they shocked La Salle, an eventual Sweet 16 team. Soon thereafter, they were mired in an eye-opening five game losing streak with the nadir occurring in Loretto, PA against the winless Red Flash. After that embarrassing loss, they then beat Robert Morris on the road! It was a season truly lacking predictability; no one ever knew – including Dickenman himself – how this team would perform on any given night.

The eroding depth was partially to blame, as CCSU was forced to play a maximum of seven scholarship players throughout most of the season due to injuries (Cumberlander, De’Angelo Speech), dismissals (Shelton Mickell), and flat-out ineffectiveness (Erik Raleigh). Now, Dickenman and his staff have some talent on the second team that could desperately give the regulars some rest.

Still, this team remains built around three perimeter players – Malcolm McMillan, Matthew Hunter, and Kyle Vinales. All three are crafty with the ball, excel at playmaking, and can score with the best of them, especially the latter two. While McMillan serves more as a facilitator, he does it quite well, as evident from his league leading assist to turnover ratio of 2.5. Hunter is a “stat stuffer” and is active in all facets of the game. A bit of a freelancer on defense, Hunter’s 4.0% steal rate was 65th nationally among players.

Vinales, though, is the leader and will need a Player of the Year type of season if the Blue Devils wish to qualify for the Big Dance. He’s the reigning scoring champion of the conference – a remarkable feat as a sophomore – but Dickenman is insistent that Vinales refocus his efforts on the defensive end. Surely, a reduction in minutes could work wonders in that regard as the junior has the talent to lockdown opposing two-guards, if he so wishes.

Cumberlander and Mobley have the unenviable task of backing up the McMillan/Hunter/Vinales trio, although both are very athletic and have a chance to eventually be very good in this league. Any kind of production off the bench from these two freshmen would be welcome.

Down low, Dickenman will rely on a senior (Terrell Allen), two JUCO transfers (Drakeford and Newman), and a promising, yet oft-injured sophomore (Brandon Peel). While Peel is nursing an injury and hopes to be back for the CT6 this upcoming weekend, Allen appears ready to take on a bigger role as a stretch four. Drakeford and Newman are unique talents in comparison, with both providing a dynamic post presence that was sorely lacking on the team last season. Their additions allow CCSU to run a little offense through the post, in case opposing defenses decide to attack CCSU’s perimeter game. Finally, De’Angelo Speech has an opportunity to find minutes in a backup role at the “3” and/or “4”.

Add it all up, and you have a team hopeful that they’re two biggest holes of last season (depth and interior play) have been reasonably filled. Given the high percentage of returning production, Ken Pomeroy and Dan Hanner’s preseason projection models have CCSU situated near the top of the NEC standings. Whether these projections come to fruition remains to be seen.

“We’re different this year from last year, because we have depth. Last year, we played with a maximum of seven players, and at times six players, this year we can go 10 deep.”
– Dickenman, on the team’s newfound depth

“We have a different Kyle Vinales. I talked with Kyle well before the season began and I told him he had to make the other players better on the team. He’s heeded that advise, and it’s a reason why I think we have a chance to be pretty good… I think his work ethic is the best work ethic I’ve ever seen been around for an athlete. That’s includes five years at Canisius, 14 years at UConn, and 18 years at Central Connecticut. And Ray Allen was a workaholic, but nobody works as hard as Kyle Vinales.”
– Dickenman, on the NEC all-conference first team selection and leading scorer of the conference, Kyle Vinales

Ryan – I haven’t been shy about promoting CCSU as my “sleeper” team of the NEC. Most of the starters return and the depth and interior length has drastically improved, therefore I’m unapologetically bullish on the Blue Devils. This is the best team top to bottom Dickenman has had in New Britain in a while, so I’m expecting a NEC tournament semifinal appearance at least. With the exception of Wagner, there isn’t another NEC team that has a better shot to land in the NCAA tournament, in my humble opinion. (17 wins, 10-6 NEC)

John – I’m not as convinced that CCSU has what it takes to be an upper echelon team in the NEC. The Blue Devils have a ton of talent, especially in the backcourt, but the depth is going to rely on a number of question marks. This team is particularly reliant on two players – Vinales and Hunter – and if you can take away one or the other you’ll have a chance. (16 wins, 9-7 NEC)

Before John and I go over our actual individual awards tonight and on Monday, I wanted to present our fictitious All-NEC Surprise team. Since some of these players may not crack the all-conference team – although some may very well – allow me to call attention to some players who have unexpectedly provided significant value to their respective teams. END_OF_DOCUMENT_TOKEN_TO_BE_REPLACED

I broke a personal best this past week when I attended four NEC games in three days. I spent a majority of my Sunday adjusting to the craziness as a result, but I’d certainly do it again. I saw two-thirds of the league in action, therefore I’m ready to broadcast my thoughts, opinions, and a bunch more on the week four version of The Good, The Bad, and The Ugly, NEC style. END_OF_DOCUMENT_TOKEN_TO_BE_REPLACED