If you’re reading this, it’s extremely likely you are a member of the choir and have been singing with us for a few years (and we thank you), but it feels like this is a good time to appreciate what Monmouth has accomplished this season. The Hawks finished the 2016-17 regular season at 26-5, winning the last 16 of them, and capturing their second straight MAAC title, this one by four games over their nearest competitor, Saint Peter’s.

They finished six games ahead of third place Iona, who just happened to be their opponents Sunday in the season finale. The Hawks led for most of the second half and held on for a 79-73 win at the Hynes Center, the second straight year they’ve won there. While Manhattan recently won back-to-back MAAC Tournament titles, it was Iona who had won three of the last four conference regular season titles before Monmouth (can you name the other? Niagara).

END_OF_DOCUMENT_TOKEN_TO_BE_REPLACED

Monmouth defeated Siena 77-73 before a sellout home crowd for the Hawks’ 25th win of the season on Friday night. Justin Robinson scored 20 points, including six in the final minutes, to clinch the game for Monmouth. Two other seniors, Je’lon Hornbeak and Collin Stewart added 13 points apiece. Here’s the video recap.

END_OF_DOCUMENT_TOKEN_TO_BE_REPLACED

King Rice is a member of the century club, and Monmouth moved one step closer to a second straight MAAC regular-season title with a 62-58 win over Manhattan Friday night at Draddy Gymnasium in the Bronx. END_OF_DOCUMENT_TOKEN_TO_BE_REPLACED

JERSEY CITY, N.J. – Like many of the smaller guards in college basketball, we may never know what Justin Robinson’s real height is, but he’s listed at 5’8”, so we’ll give him the benefit of the doubt for the purposes of this narrative.

While he’ll get some competition from A.J. English, he’s certainly in the running for MAAC Player of the Year at 20.3 points, 3.8 assists, and .430 three-point percentage. But Sunday, he was struggling. With 3 minutes left in a tie game with Saint Peter’s, Robinson had just 5 points on 2-8 shooting and looked – like the rest of his Monmouth team – as if the length of the season and pressure they’ve been under was wearing on him.

END_OF_DOCUMENT_TOKEN_TO_BE_REPLACED 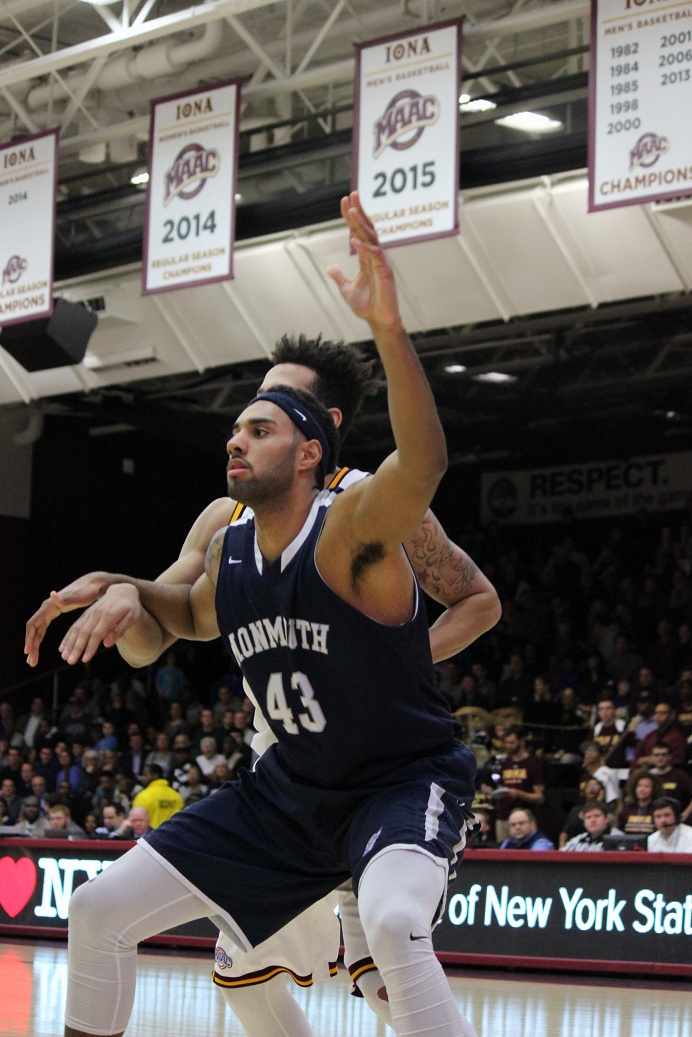 HAMDEN, Conn. – Set your neighborhood time machine to 2013 and the large crowd at the TD Bank Center for Quinnipiac and Monmouth on a January night in 2016 probably made some sense to you. After all, although they were never able to quite capture the NEC title, Quinnipiac was always right there and it seemed that the Bobcats’ impending move to the MAAC would only propel them to bigger and better things (and more consistent crowds).

Sure enough, a year later, Quinnipiac was doing just fine, thank you, in its new MAAC surroundings, still pummeling teams into submission, once 14-4 in the league before a late slide. Meanwhile, for King Rice and Monmouth things were, well, rough. Rice’s team hadn’t even qualified for the 2013 NEC Tournament and its 5-15 (and 11-21 overall) a year later mark might have even exceeded expectations for a program making an upward move with seemingly very little to work with.

END_OF_DOCUMENT_TOKEN_TO_BE_REPLACED

The MAAC has a unique strength this season. The league is blessed with a number of talented sophomore point guards. Canisius’ Billy Baron and Manhattan’s Mike Alvarado showed just how important a quality lead guard can be in the chase for a league title. Now there will be a number of players vying to claim their spot atop the mantle. END_OF_DOCUMENT_TOKEN_TO_BE_REPLACED