Barring the biggest upset in the history of American sports, the season will come to end in some fashion or another for all NEC teams in the next month or so. For most, it will be a defeat at some stage of the upcoming NEC Tournament. However, for Central Connecticut (and St. Francis Brooklyn) it’s all over next week, a fact made official after the Blue Devils lost to Robert Morris 74-64 Saturday afternoon at Detrick Gym.

Donyell Marshall hoped for better this season, but he knew he had one of the hardest rebuilding projects in the nation on his hands, and now that the season is winding down and his team is officially eliminated, he can finally speak with some candor about his plight and what he learned as he looks a little toward the future.

END_OF_DOCUMENT_TOKEN_TO_BE_REPLACED 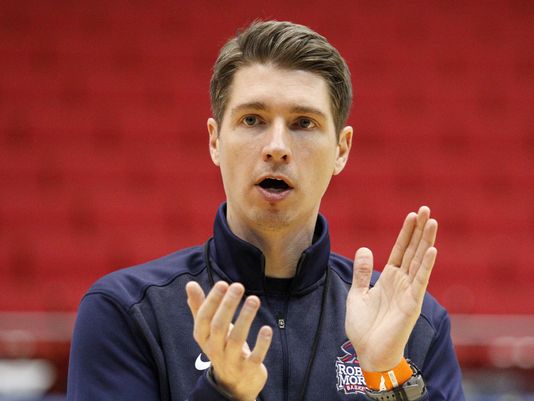 After a challenging 2015-16 season, Andy Toole is slowly but surely getting Robert Morris back to the brand of basketball the Colonials have been known for: a tough and disruptive defense that works to contest virtually every shot their opponents attempt. END_OF_DOCUMENT_TOKEN_TO_BE_REPLACED

Robert Morris took a big step backward last season finishing 8-10 in the NEC and 10-22 overall. In particular, the Colonials regressed offensively, falling off by more than 10 points per 100 possessions. END_OF_DOCUMENT_TOKEN_TO_BE_REPLACED

After enduring a wild postseason which included a devastating loss in the NEC semifinals, only to be followed by the greatest win in program history, Robert Morris is in an unusual position. Andy Toole and his staff must reload. Three fifths of the starting lineup has moved on, along with more than 45% of their possession minutes from last season. END_OF_DOCUMENT_TOKEN_TO_BE_REPLACED