Outlook: Despite graduating key pieces from last year’s champions, the Tigers have enough remaining talent and potential to be legitimate title contenders. 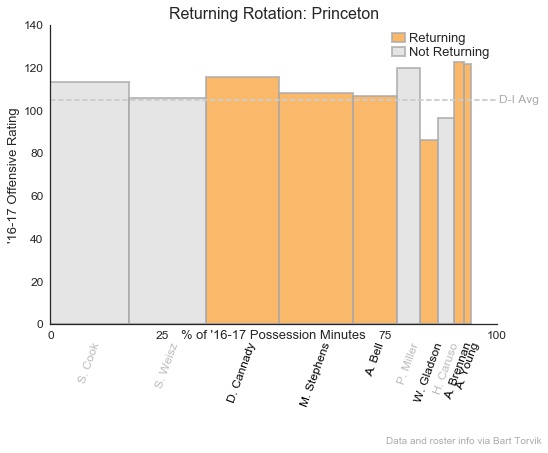 The Ivy League shapes up as a true three-team race. But every trio has one member who is an afterthought, the Cooper Manning or the Peggy Schuyler. This preseason, Princeton has been the forgotten team, relegated to the “don’t forget about…” category while Yale and Harvard soak up all the attention.

The Tigers deserve better. Remember, they went 14-0 last year while outscoring the league by .22 points per possession — twice as high as the Crimson and nearly .20 ppp above Yale. That’s a lot of ground for the field to make up. And despite losing two All-Ivy players, it’s not as if Princeton’s roster was decimated by graduations:

Based on recent champions, Princeton is at the inflection point between rebuilding and reloading. Those who returned most of their possessions became dynasties, like 2008-10 Cornell or the mid-00s Harvard. (Yale’s 2016 team belongs in the same group, since it also returned Brandon Sherrod from the Whiffenpoofs.) Those who returned less than half their possessions struggled, with Harvard’s 2013 squad the only exception.

The Tigers are in the middle — coincidentally, most comparable to their predecessors in 2012, who lost two top players but brought back a star junior and other contributors. (That team fell to third place, but it finished top-100 in KenPom and outscored the league by .13 ppp, levels good enough to challenge for the title in many years.)

It’s not hard to see this year’s team repeating as champions. Princeton’s defense was head and shoulders above the rest of the league last year, so even with demerits for attrition, all models project it at or near the top of the league again. The Tigers return their top two scorers from Ivy play, and they’ve led the league in offensive efficiency in five of Mitch Henderson’s six seasons. Combine a potentially great defense with a potentially great offense, and you have a legit title contender.

Only one team had a lower assist rate in Ivy play than Princeton — which would have been heresy just a decade ago — and expect that trend to continue without Spencer Weisz, the team’s dimes leader. Instead, Henderson has a lineup that gives opposing guards nowhere to hide. Devin Cannady can go off against any defender, and Amir Bell will overpower smaller ones. Henderson said the Tigers will still post-up from nearly every position, inverting their offense in tricky ways.

Myles Stephens becoming the Defensive Player of the Year as a sophomore wasn’t shocking, but his leading the team in scoring in Ivy play was. He reached a new level in the conference tournament, setting consecutive career highs en route to 44 total points, most of them from 1-on-1 isolations. But he will now be the focal point for opposing defenses, rather than the mismatch left over, so he’ll have to get better just to match the same stats. Two particular areas to get better are vision (few high-usage ballhandlers succeed with a single-digit assist rate) and foul shooting (66% for his career).

If Bell, Stephens and Cannady each shoot above 40% from three-point range, as they did last season, they could plausibly carry Princeton to a title on their own. More likely, someone will slump, and a new threat will have to emerge. Aside from Will Gladson and Alec Brennan, who should split some time at center, no other returning Tigers played even five minutes per game last season. That leaves a lot of holes to fill — and a lot of opportunities for a well-regarded rookie class, headlined by versatile forwards like Sebastian Much and Jerome Desrosiers.

Still, few recent champions have relied heavily on unproven players (really, just Harvard in 2013). It might be particularly tough for a team like Princeton, whose path to the title involves great defense throughout the lineup. The Tigers should have the athletic ability to switch everything and double-team aggressively — tactics that brought so much success last year — but that style requires seamless communication. Will it be effective with new players, or will Princeton have to change its approach?

They’ll have plenty of opportunities to test themselves early — at Butler, Miami, USC and a competitive Diamond Head Classic, plus a fun home game against BYU — and early indications are already positive. That shouldn’t be a surprise: Princeton has been the Ivy’s best team over the course of this decade. It’s finished in the top 100 nationally (per KenPom) in six of the last seven seasons, joining only Gonzaga, St. Mary’s, BYU and Wichita State among mid-major leagues. So while the Tigers do have a couple more openings in their lineup than the other contenders, they also have a track record of filling them well.