Design a site like this with WordPress.com
Get started
Skip to content
jtemplon Ivy League, Penn October 27, 2017 4 Minutes

Outlook: Fitting all the pieces together will be a challenge, but the Quakers have enough talent to return to the Ivy League Tournament. 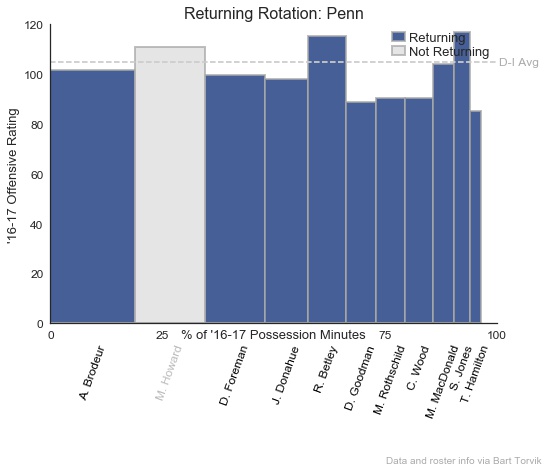 Last year’s Quakers seemed to find their stride down the stretch, finishing 6-2 to reach the playoffs. They were one free throw or box-out away from playing a home game for an NCAA bid (in which they would likely have been a slight betting favorite). They graduated only one contributor, and have nine returning players who’ve started at least 10 games in red and blue.

So, blessed with all those established options, coach Steve Donahue decided to enter the fall by … moving his best player to a new position?

AJ Brodeur was a top-tier Rookie of the Year candidate in his debut, and it’s not as if he couldn’t handle playing center: He held his own against 7’6” Tacko Fall in a big upset at UCF, reliably scored from the post down the stretch of close games, and anchored Penn’s huge year-over-year defensive improvement. His play drew rave reviews from opposing coaches, who called Brodeur “an absolute star”, “just a monster”, and “maybe the best player in the Big 5”, per City of Baksetball Love.

But this year he’ll slide down to the four, likely starting alongside center Max Rothschild.

“It makes our offense better, it makes our defense better, it makes our rebounding better, if indeed AJ could play the four and be that versatile guy on both sides of the ball”, Donahue said in the preseason teleconference. “Can he switch ballscreens, can he play on the perimeter on offense? I think he’s done a very good job of that, and I think you’ll see a kid who shoots the three and makes plays off the dribble.”

It’s gutsy on Donahue’s part. It’s also a worthy gamble at this point in the year: Pairing two big men can help cover for Penn’s backcourt, which is undersized and includes some iffy defenders. Offensively, Brodeur will have to work harder to find space inside, but smart teams can make it happen — just ask Yale, which has been overpowering Ivy opponents for years.

But it will really test the star sophomore on both ends. Offensively, how well can he operate from the perimeter? He’s shown the ability to shoot threes in small samples (8-19 last year, 2-3 in a preseason scrimmage), but consistently making plays from 22 feet is a different beast. Defensively, can he guard a star scorer like Seth Towns? Maybe Myles Stephens or Miye Oni if their teams play small? We might continue to see some zone, such as the 1-3-1 that was effective last year. (For what it’s worth, the Quakers were outscored by 12 points in about 55 minutes with Brodeur and Rothschild together last year, compared to +24 in the rest of Ivy play.)

It’s worth learning the answers, but Donahue should be ready to change course if they aren’t good. It’s not just about Brodeur: Rothschild must step up into starters’ minutes at center, and the Quakers will still need a solid backup to emerge. Jarrod Simmons has the talent for that role, if not a larger one; Dan Dwyer might also see time early in the year.

The positional shift also puts more pressure on the remaining guards. Adding Rothschild to the starting lineup mitigates the loss of Matt Howard’s defense and rebounding — but it leaves a gaping hole on offense, where Howard was a reliable and efficient scorer throughout his career. Rothschild’s offense is limited (plagued especially by turnovers), meaning three others will have to pick up the slack.

Ryan Betley projects as the top backcourt scorer after averaging 18 ppg in his final eight games. Small samples are all we have with the 6’5” Betley, who missed the first six weeks of his rookie campaign with a broken hand. But even so, those eight games are playing an outsized role in preseason expectations — his season high was 15 in ten games before that stretch.

The other two positions are full of intrigue. Antonio Woods returns after a year and a half away, but he finds someone very similar in his place — senior Darnell Foreman, another 6’1” playmaker expected to start at the point. Both are subpar three-point shooters (27% career for Foreman, 26% for Woods), so Woods might fit best in a high-usage bench role rather than sharing the floor full-time. Adding to the logjam is sophomore Devon Goodman, another undersized point guard who came on strong late last year.

More options abound: Jackson Donahue will find time as a shooter, and perhaps Caleb Wood or Sam Jones too if needed. Eddie Scott is a highly touted freshman who would fit nicely on the wing. Tyler Hamilton can add size in the backcourt, and even the deepest corners of the roster include former starters like Matt MacDonald and Jake Silpe.

If everything goes right — if Betley is an All-Ivy-caliber scorer, if one of the rookies is good immediately, if Woods adds a new dimension to his game — the pieces of a fringe title contender are here. Based on each player’s established skills so far, it’s more likely that Donahue ends up in rotation limbo once again, cycling players in and out of a lineup that is always a bit unsatisfactory on one end or the other. Even in that case, Brodeur and Penn’s sheer depth of solid talent should carry the Quakers back to the postseason.

As always, Penn will figure this out with a fun schedule. The late-November trip to Villanova headlines a tough Big 5 slate; the remainder is rather soft, but dates with fellow mid-tier mid-majors like Navy, Monmouth and Dayton will be illuminating. The pacing is weird: Eight games away from home starting in late November, followed by nine straight in Philly through the beginning of conference play.