Design a site like this with WordPress.com
Get started
Skip to content
jtemplon NEC, Wagner October 19, 2017 3 Minutes

Outlook: A revamped frontcourt combined with an experienced backcourt, should be enough to keep the Seahawks in the hunt in the NEC.

Four years ago the Wagner staff saw a promising young forward fall through their hands. Nick Madray went to Binghamton and immediately became a key player for the Bearcats, averaging 10.8 ppg in his freshman season.

The 6-foot-9 forward was injured for a large chunk of his sophomore campaign and then transferred to Eastern Michigan where he was more of a role player for the MAC squad. This season his odyssey concludes where it might have begun. Madray is being counted on by the Wagner staff to sure up a frontcourt that lost three key players in Michael Carey, Mike Aaman, and Greg Senat.

Wagner head coach Bashir Mason said the Seahawks staff was “heartbroken” when they didn’t land Madray the first time. But they’re making up for lost time.

“Our vision for him is what he was at Binghamton,” Mason said. “A guy who is almost a double-double guy.”

Madray will team up with another transfer, former Quinnipiac forward A.J. Sumbry, in the frontcourt. Sumbry will need to take on a larger role after averaging 4.2 ppg and 4.0 rpg in 30 games last season for the Seahawks. Another player to look out for in the paint is Nigel Jackson. The 6-foot-7 forward from Baltimore has been impressive in early practices.

The backcourt is getting a boost from a player who has been around the program for three seasons now. Wagner welcomes back guard Romone Saunders to the court. Saunders was Wagner’s best player in their season-opening victory over UConn last November when he scored a team-high 15 points. He then missed the rest of the season due to injury. He will most likely team up with Madray as focal points for the Wagner offense. (As the Seahawks lost their three highest usage players from a season ago.) 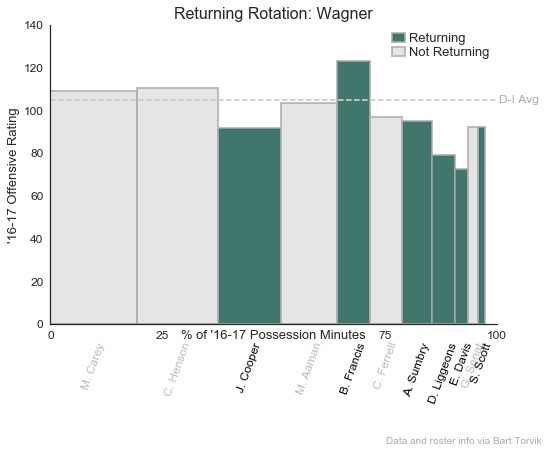 The backcourt also returns JoJo Cooper and Blake Francis. Cooper needs to improve his turnover rate in his fourth season on Grymes Hill, but Mason said the 6-foot point guard has the potential to have a strong senior campaign.

“Cooper had probably had the best summer of his career and I foresee him having a breakout season,” Mason said. “He’s not having to look over shoulder. He’s been able to settle on in. It’s his position to run. His confidence has gone through the roof.”

Francis had a strong freshman season offensively—he shot 41% from three and scored 7.2 ppg while playing almost exclusively off the ball alongside Cooper and Henson—but he’ll have to take on a larger share of the scoring now that Henson and Carey have departed.

In addition, the Seahawks garnered a late recruiting win when they were able to sign Tyler Plummer. Mason believes that the 6-foot-3 Canadian wing has the ability to make an immediate impact for the Seahawks.

“He has that Wagner toughness,” Mason said about Plummer. “He plays with that chip on his shoulder that is attractive to us.”

It all adds up to a deep roster that should give Mason a number of options on any given night. Wagner has the benefit of five home games during non-conference—a rarity for any NEC team—to help settle into a rotation. It will be interesting to see how sixth-year head coach rations minutes during a non-conference schedule that includes a number of winnable games.

“This is probably one of the more challenging groups that we’ve had in that we’re going to have to see where we are when we start and make adjustments as we go,” Mason said. “Once we get into conference play and we settle into our identity I definitely believe that we have the pieces to contend for an NEC title.”

And that’s what really matters.