Outlook: One of the league’s best offenses last season must take a step forward on the defensive end of the court in order to reach the next level.

The Canisius Golden Griffins will seek to build on the moderate success they enjoyed in 2016-17 and take a jump to the next level in head coach Reggie Witherspoon’s second season at the helm.

Witherspoon assumed control of the Griffs last May in the wake of previous head coach Jim Baron’s retirement. Despite taking over relatively late in the offseason, Witherspoon was able to fill out a roster which became one of the most efficient squads in school history.

Canisius set new program records last season with 601 total assists, and 309 made 3-pointers. As one of the best teams in the nation at sharing the ball, the Golden Griffins ranked eighth in Division I in total assists and sixth with 17.7 assists per game. Their efficiency from behind the arc also led to top-100 national rankings in both made 3-point field goals per game (9.1) and team 3-point shooting percentage (37.1%).

Offense was far from the Griffs’ problem in 2016-17, and they project to be potent on that side of the ball again this season. It was on the other end of the court where Witherspoon’s squad faced most of its issues.

With seven players listed at 6-foot-7 or above, the Golden Griffins do possess plenty of size to create offensive mismatches, but only time will tell if that advantage translates to the defensive end.

Three players were named to All-MAAC squads last season, the first time that had occurred in a decade. Guard Kassius Robertson was named to the league’s second team, forward Jermaine Crumpton to the third team, and point guard Malik Johnson to the All-Rookie team. 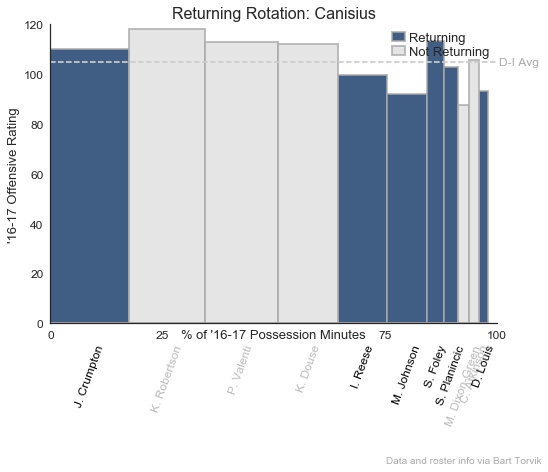 Robertson – the team’s leading scorer a season ago with 16.1 ppg – left via graduate transfer to Missouri this offseason, but the latter two project to carry a major role into 2017-18.

Crumpton sat just behind Robertson with 15.9 ppg last season, and has the potential to be one of the league’s leading scorers. A native of nearby Niagara Falls, Crumpton also pulled down 4.5 rebounds per game last year. Posing a threat from all areas of the offensive zone, Crumpton knocked down 52.3% of his shots from inside the arc last season and 42.9% beyond it.

Johnson’s 4.4 assists per game ranked fourth in the MAAC behind Stevie Jordan (Rider), Rickey McGill (Iona), Marquis Wright (Siena), and Justin Robinson (Monmouth), and his 148 total assists were good for the second-most by a Canisius freshman in program history.

His proficiency for sharing the ball earned the Richmond native the final spot on the All-Rookie team, but Johnson also set a school record by starting all 34 of his squad’s games. Locked in as the Griffs’ starting point guard, Johnson should continue to make his team’s offense hum well into the future.

Despite the loss of three of last season’s top four scorers, the Golden Griffins bring back a strong stable of talent along with a handful of newcomers. Of the returners, sophomore guards Isaiah Reese and Spencer Foley are in line to take big steps forward this year.

Reese averaged 7.1 points, 3.7 rebounds, and 2.9 assists during his freshman campaign, and for much of the year looked like he would be the Griffs’ representative on the All-Rookie team. Another year older, Reese should be the one to benefit most from the departures of Robertson and Kiefer Douse.

Foley averaged just 4.0 points in 9.4 minutes off the bench last season, but established himself as a legitimate threat behind the 3-point line. A matchup nightmare as a guard listed at 6-foot-7, 81% of Foley’s shots came from downtown with 36% falling through the net.

Witherspoon has added six new faces to the squad, each with the chance to make an impact. Juniors Marcale Lotts and Jonathan Sanks join the Golden Griffins from the JUCO level out of Jacksonville College and Spartanburg Methodist Junior College respectively.

Lotts, a 6-foot-8 forward from New Orleans, averaged 6.6 points and 5.1 rebounds for Jacksonville while connecting on 55.5% of his shots. Sanks averaged 14.4 points and connected on 44.9% of his 3-point attempts in 33 games for the Pioneers at Spartanburg last season.

Four freshmen join the team as well. Jalanni White and Scott Hitchon will seek to carve out roles in the frontcourt while D.J. Heath and Takal Molson join the Griffs’ potent corps of guards.

Canisius will open the 2017-18 season at local foe Buffalo before taking on Air Force the following Tuesday. The Griffs’ game against the Falcons will be the first of the 2017 Men Against Breast Cancer Showcase, which culminates in a round-robin with Texas State, Arkansas-Pine Bluff, and University of the Pacific in Stockton, California over Thanksgiving weekend.

The Golden Griffins will also take on St. Bonaventure in early December before taking on America East power Albany and CAA contender Elon later in the month. As part of the MAAC’s move to an 18-game schedule this season, Canisius will neither host Manhattan nor travel to Fairfield.