Outlook: After a down year which culminated in a first-round exit in the CAA tournament, Hofstra returns a powerful stable of talent in search of a return to the conference title game.

The first season of the post-Juan’ya Green era went nothing like Hofstra would have hoped. A year after coming up just a game short of an NCAA Tournament berth, the Pride faltered early and often.

Despite an 8-5 non-conference record, which included wins over Siena and Long Island rival Stony Brook as well as a close battle with St. Bonaventure, the Pride dropped winnable games at Sacred Heart and Manhattan, who finished the year a combined 23-41.

A heartbreaking overtime loss to William & Mary in their opening game of 2017 kicked off a six-game losing streak from which the Pride never recovered. A 7-11 conference season dropped Hofstra to seventh place come March. Despite finishing the regular season with back-to-back road wins, the Pride were knocked out of contention by Delaware in the tournament’s opening round.

Heading into 2017-18, Hofstra will seek to build around its talented group of returnees supported by some key new faces. Lack of depth plagued Joe Mihalich’s squad last season, but the Pride’s head coach will have plenty of personnel to rotate this time around.

If it’s possible to nearly average a double-double and have that labeled a disappointment, the expectations for senior Rokas Gustys certainly reflect the center’s immense talent. Gustys averaged 9.2 points and a league-best 12.1 rebounds per game last season, but both were steps down from the Lithuanian’s tremendous sophomore campaign.

In that 2015-16 season, Gustys averaged 13.5 points to go along with 13.0 rebounds. In each of the last two seasons, Hofstra’s dominant big man has ranked within the top four in the nation in rebounding. If he remains healthy and refines his scoring touch, Gustys will not only be a tremendous force for the Pride, but will garner attention from NBA scouts throughout the season.

Perhaps no player in the nation experienced a breakout year quite like Justin Wright-Foreman. The Queens native posted just 44 total points during his freshman campaign two seasons ago, but led the Pride with 18.1 ppg last year. Wright-Foreman logged four 30-point games in 2016-17, and reached the 20-point mark in 11 of the team’s final 12 games.

Alongside Wright-Foreman in the backcourt will be rising sophomore Eli Pemberton. The Connecticut native did it all for the Pride in his rookie season, scoring 12.8 points to go along with 3.3 rebounds and 2.0 assists per contest. If not for the success of St. John’s duo Marcus LoVett and Shamorie Ponds, Pemberton would have garnered more attention as one of the best freshmen in the tri-state area last season.

Pemberton sees himself as the playmaker to complement Wright-Foreman’s scoring prowess, but in tandem the pair could make up one of the nation’s most prolific backcourts. As can be seen in the graph of Hofstra’s key returners, Wright-Foreman and Pemberton were both well above the DI average in offensive rating a season ago. 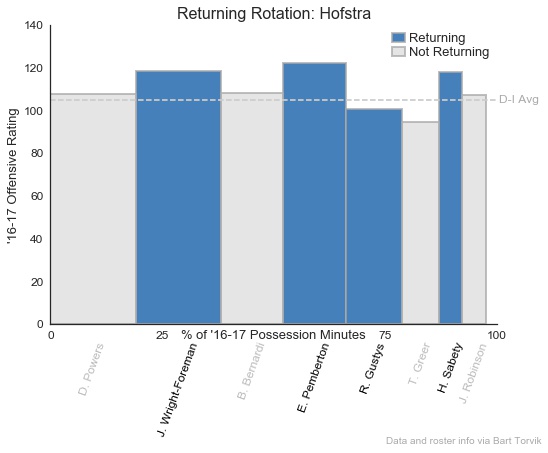 Desure Buie and Kenny Wormley will step in to take over at the point after the graduation of last year’s starting point guard Deron Powers. Buie played just eight games last season before tearing his ACL during the Pride’s December win over Columbia. Prior to his injury, the sophomore was averaging 2.1 assists per game in limited minutes, but he projects to take on a major role in his return to the court.

Wormley joins the Pride after a season at Indian Hills Community College, where he averaged 8.8 points to go along with 2.2 assists. Prior to that, he averaged 4.6 points and 1.8 assists during his freshman campaign at Siena in 2015-16.

Senior forward Hunter Sabety provides the Pride with a solid secondary option to Gustys under the basket, and should play a major role off the bench. The native Long Islander averaged 4.1 points and 4.5 rebounds last season, but during a four-game stretch from late January into early February when Gustys sat out due to injury, Sabety averaged 10.0 points and 8.8 boards.

Perhaps the most important of Hofstra’s new additions this season is that of Brooklyn native Joel Angus III. The graduate transfer from Southeast Missouri State underwent hip surgery after sustaining an injury just one game into his senior campaign last season, but is slated for a major role in the Pride’s frontcourt this year. As a junior in 2015-16, Angus averaged 10.5 points and 5.9 rebounds for the Redhawks.

Others seeking to carve out a role in the frontcourt include true freshmen Matija Radovic and Kevin Schutte, as well as redshirt freshman Stafford Trueheart.

Radovic joins the Pride after a prep year at Montverde Academy in Florida, and was a member of the Serbian national team. Although standing at 6-foot-7, Radovic is capable of dealing damage away from the basket as well.

Schutte had success playing both basketball and soccer in the Netherlands despite only picking up the former at age 16. The Dutchman stands at 6-foot-9, and while he seems destined for a limited role this season, Schutte could be the Pride’s next frontcourt standout behind Gustys.

Freshman guard Jalen Ray makes his way to Hofstra out of Hampton High School in Virginia. He averaged 25.0 points, 4.0 rebounds, and 3.0 assists as a senior, and could work his way into the backcourt rotation out of the gate.

Sophomore guard Tareq Coburn joins the Pride after a year at St. Bonaventure in which he managed minimal production in a crowded but talented backcourt. A graduate of Cardozo High School in Queens, Coburn will sit out the 2017-18 season due to NCAA transfer regulations.

Highlighting Hofstra’s non-conference schedule is a showdown with Villanova at the renovated Nassau Coliseum on Dec. 22. Current Villanova head coach Jay Wright coached at Hofstra for seven seasons, leading the squad to back-to-back America East titles and NCAA Tournament appearances in 2000 and 2001, spurring Hofstra’s ascent to the CAA.

The Pride will also take part in the Gildan Charleston Classic with three games over four days in mid-November. Hofstra will face reigning A-10 regular season champion Dayton in the first round Nov. 16 before taking on one of Clemson or Ohio the following day. The tournament will culminate two days later with a game against one of Auburn, Indiana State, Old Dominion, or Temple.

Hofstra will take on four MAAC squads including repeat regular season champions Monmouth on December 6, while the “Battle of Long Island” will be renewed Dec. 12 when the Pride travel east to take on local rival Stony Brook.