Outlook: Second-year head coach Brian Earl is building a foundation for the long run, but this season he’ll have to rely heavily on his star scorer. 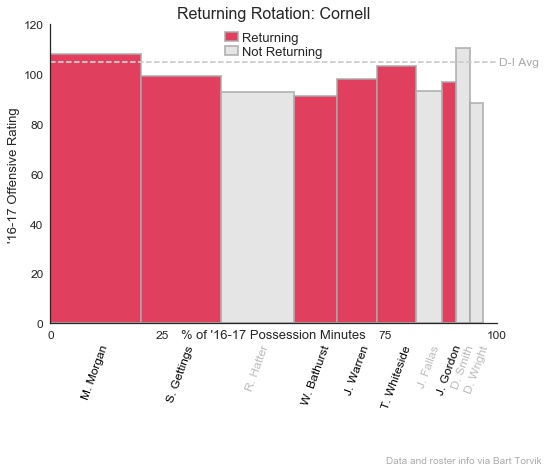 Cornell fans might have barely recognized their team last season. Though most of the faces were the same, their actions were not, as first-year head coach Brian Earl immediately established his Princeton-influenced style. Some changes were for better (much more ball movement; higher accuracy; better rebounding) and some for worse (turnovers and steals). The shift was not surprising, but it was dramatic.

Despite the new look — and a brutal rash of injuries that sidelined three returning starters by year’s end — the Big Red ended up not far from where they had been before: Tied for last in the Ivy League, and ranked in the mid-200s nationally.

In the long run, Earl’s changes will be for the better. He’s starting to recruit talent that fits his system: Overlooked players with passing ability and basketball instincts. That philosophy is typified by this year’s most famous Ivy recruit — though not the highest-rated — in Jimmy Boeheim, who has length, shooting, and the court vision one would expect from a coach’s son. (If nothing else, Boeheim’s bloodlines should ensure that Cornell’s series with Syracuse continues for four more years, starting with the Nov. 10 season opener.)

Earl did inherit one piece tailor-made for his offense: Stone Gettings, a 6-8 center who was one of the league’s most improved players last year. Despite his position, the sophomore ranked third in Ivy play with a 27% assist rate, and he shot 36% from beyond the arc on nearly four attempts per game. Gettings also improved defensively (top-ten in defensive rebounding and blocks), ably filling in for an injured David Onourah (now a grad transfer at UConn).

It takes time to build a pipeline of players who fit like Gettings, and even longer for them to learn the system. Meanwhile, there are growing pains of players adjusting to a scheme they weren’t recruited for: Frequent miscommunication (a 20% turnover rate, spread across nearly all contributors); a lack of shooting (33% from three). A second year with the same core should help, but there will still be times when the offense doesn’t click.

When that happens, Cornell has the league’s best fallback option: Let Matt Morgan do his thing. After scoring 22.6 ppg in Ivy play as a freshman, Morgan’s per-game output dropped to 17.4 last year. But his accuracy increased from all over the court, and he took advantage of new opportunities, breaking for backdoor cuts when opponents feared his range.

Most importantly, Morgan continued to show that he can be efficient while taking lots of shots. A central tenet of basketball analysis — dating to Dean Oliver’s seminal skill curves — is that players are less efficient when they carry a larger scoring load. But the rate of decline varies: Efficiency drops off quickly for some, while others can shoot over and over with similar results. Players in the latter group are rare, and the best are extremely valuable, because they can bail out their offense with good shots from any situation.

Morgan is one of those players. When comparing Morgan’s career stats to his peers’ — last year’s five Ivy players with the highest usage rate — everyone is highly efficient in games when they use 20-25% of possessions. (Ignore the outliers below 20% usage, a small sample for go-to players.) But most have a clear downward trend, with declining efficiently when their usage rate reaches the 30s. Not so for Morgan — his curve is practically flat, such that he has a 110 offensive rating over seven games with a 35%+ usage rate. 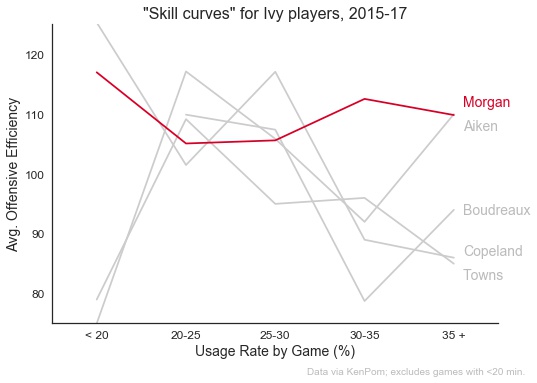 Given Morgan’s skills, Cornell’s offense would benefit from giving him even more shots. The rest of us would, too: It’s so much fun to watch Morgan score from everywhere. His out-of-nowhere rookie season single-handedly made the 2015-16 Big Red watchable, and he remains the best reason to tune into Big Red games.

While most Ivy teams became much more aggressive last season, Cornell went the other way. The net result wasn’t much different — the Big Red rebounded better and kept opponents out of the paint a bit more, but they lost out on valuable steals. Their defense wasn’t a disaster, but it wasn’t an asset either, and this season projects the same way.

All in all, Cornell will naturally improve this year based on experience and health. Assuming six wins isn’t enough to crack the top four again, however, the Big Red’s most likely path to the playoff is a step-change on offense. Morgan and Gettings are a great core to build around, and they’ll have a comfortable non-conference schedule (though mostly on the road) to get in gear. But their supporting cast, and the system they run, will determine Cornell’s fate.