Outlook: After graduating 80% of his starting rotation from a year ago, sixth-year head coach Kevin Baggett has reloaded quickly and aims to finally guide the Broncs over the playoff hump.

Rider is but one of many MAAC squads seeking to find its way back to success after the graduation of a large senior class. The Broncs return just one starter from a season ago – sophomore point guard Stevie Jordan. 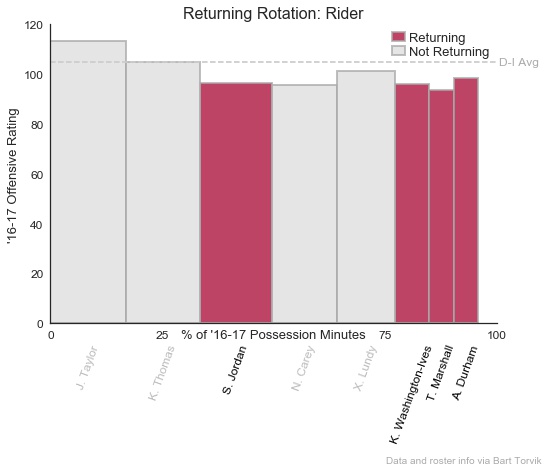 Although Rider will be retooling this season, sixth-year head coach Kevin Baggett has placed his team in good position to contend right away, thanks to an influx of talent. Three players who sat out all of last season on a redshirt year will join five returnees and six newcomers to form one of Baggett’s deepest squads yet.

Jordan will be thrust into the spotlight in his sophomore season, but the young point guard has earned that place. As a freshman last season, Jordan led the MAAC and ranked 24th in the nation with 5.6 assists per game. For perspective, that was better mark than accomplished by seasoned veterans like Justin Robinson, Marquis Wright, and Trevis Wyche.

Jordan added 11.7 points per game en route to three Rookie of the Week awards and a spot on the MAAC All-Rookie squad. Now given free reign over the backcourt with the departure of Jimmie Taylor, Jordan’s potential is limitless.

Durham similarly played a limited role last season, averaging 4.1 points in just 13.3 mpg. The Philadelphia native shot just under 40% from 3-point range in 2016-17, and like Washington-Ives, should benefit from his veteran status in this backcourt.

Sophomore Tyere Marshall is Rider’s lone returner in the frontcourt, and that distinction bodes well for his stat line. Marshall averaged just 4.0 points and 3.9 rebounds in 12.9 minutes last season, but with the graduation of starters Norville Carey, Khalil Thomas, and Xavier Lundy from the frontcourt, Marshall should easily more than double his production heading into his second season.

The Broncs’ final returner played in just nine games last season before suffering a knee injury. Dimencio Vaughn earned a redshirt season and will keep his freshman tag this year, but his role remains uncertain. In addition to recovery from his injury, Vaughn was arrested this summer after a dispute at a park in Connecticut and charged with weapons in a vehicle and possession of a controlled substance when police located a BB pistol and a small amount of marijuana in his car. Vaughn is reportedly under an indefinite suspension, so as of now it is unclear when he will see game action.

Rider will receive plenty of forward depth in the form of additional players who sat out last season. Devine Eke, a transfer from Maine, should be a defensive lightning rod. The redshirt sophomore averaged 9.5 points in 30 games as a freshman with the Black Bears, and led the team with 6.8 rebounds and 1.6 blocks per game while converting on 61% of his shots.

Frederick Scott also becomes eligible after transferring from DePaul, where he played in just four games his freshman season. The 6-foot-8 Indiana native comes to Lawrenceville with four years of eligibility remaining, and should be able to make an immediate impact on this frontcourt.

Freshman Jordan Allen sat out last season as an academic redshirt, but comes into this season with a reputation as a legitimate sharpshooter. The Delaware native led the state with 26.5 ppg as a senior, and was named Gatorade Delaware High School Player of the Year.

Junior Karamoko Cisse joins the Broncs through the JUCO route. He played for Trinidad State College in Colorado where he averaged 12.7 points and 6.4 rebounds per game last season while shooting nearly 60% from the floor. Projected to play under the basket alongside Marshall, the duo could become a formidable threat in the Broncs’ frontcourt for the next two years.

Guards Paxton Wilson and Tyrei Randall join the squad as the lone two incoming scholarship freshmen. Wilson averaged 15.4 ppg at Calvary Christian High School in Clearwater, Florida last season. Another potential threat from long range, Wilson should be able to find opportunities to launch his shot this season. Randall, a versatile lefty, averaged 16.6 ppg as a senior at Rangeview High School in Colorado.

Ahmad Gilbert and Kimar Williams, both junior guards, will sit out this season per NCAA transfer regulations. Gilbert joins the Broncs from the University of Minnesota, while Williams transferred out of Florida International.

Rider’s roster will boast three walk-on players including freshmen guards Noah Buono and Ryan O’Leary, as well as senior Joe Ajike, who served as team manager for his first three years at the university and now represents the squad’s lone senior player.

Now in his sixth year at Rider, Baggett has retooled on the fly and boasts a squad capable of trotting out as many as 10 or 11 players on any given night. If the pieces fit together, he will try to lead the Broncs past the conference tournament quarterfinals for the first time in his tenure.

The Broncs finished in second place in the regular season standings twice in Baggett’s tenure – 2013 and 2015 – but have continually been bounced from contention in early March. Given the massive turnover felt throughout the MAAC this season, Rider may just have the squad to get over the hump this season.