Outlook: Two important transfers leave the Bulldogs with holes, but the potential is still there for Bryant to develop into a feisty team in the NEC. 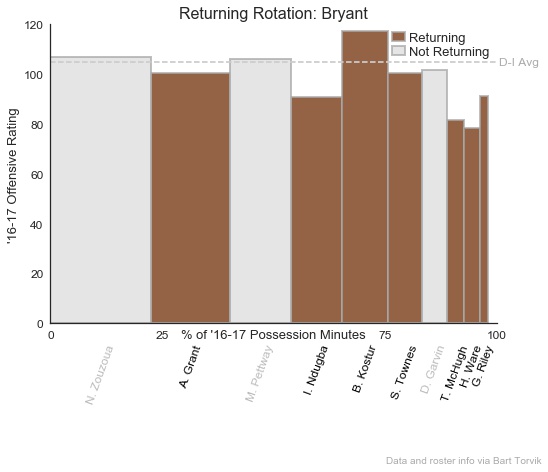 Bryant was one of the NEC schools hit the hardest by the league’s 2017 offseason transfer epidemic. The Bulldogs lost a pair of talented sophomores in Nisra Zouzoua and Marcel Pettway to NEC West (better known as Nevada).

Zouzoua was the best pure scorer in the NEC during 2016-17, averaging 20.3 ppg during the season. Pettway was almost as efficient as Zouzoua offensively while averaging 10.3 ppg and 6.5 rpg. Their losses are significant, but the cupboard is far from bare. The return of Adam Grant, who had a strong freshman campaign, leaves the Bulldogs with another guard – one who’s more well rounded than Zouzoua – that seems primed to break out during his second time through the NEC. If it wasn’t for Keith Braxton’s fantastic 2016-17 season, Grant would likely be the reigning NEC Rookie of the Year.

In addition, Bosko Kostur saw his offensive efficiency improve dramatically in 2016-17 and he should have a strong senior season for the Bulldogs as one of the league’s best stretch power forwards. (Though it’s unlikely he’ll be the one to absorb the possessions that Zouzoua and Pettway leave behind.)

The early departure of Zouzoua could also open up more opportunity for Ikenna Ndugba. Ndugba finished sixth in the NEC in assist rate during his freshman campaign. He was also strong on the defensive glass and created a number of steals. It’s likely that Ndugba’s turnover rate will drop as a sophomore and that should make him an extremely dangerous offensive threat. Over his final eight games last season, the point guard averaged 6 rebounds and 2 steals per game, while impressively shooting 51.4% from the field.

The much bigger question for the Bulldogs is on the defensive end. Bryant hasn’t finished in the top half of the NEC in defensive efficiency since the 2013-14 season, when Alex Francis and Corey Maynard were defending the paint and perimeter respectively. The graduation of Dan Garvin, who impressively averaged a block rate of 6.3% in his career, leaves Bryant with no one who can be considered a defensive anchor. (Though Garvin’s minutes were limited last season.)

Tim O’Shea has brought in a bunch of size to fill out the roster. Malik Smith, a 6-foot-6 forward from UNC Asheville, will have to sit out this season, but others will get a chance to make an impact on the court. Expect freshman Ryan Layman—brother of former Maryland and current Portland TrailBlazer forward Jake Layman—to get a chance inside along with redshirt freshman Brandon Carroll. Layman has been lauded for his athleticism and shooting, but will need to work on being aggressive when scoring opportunities are available. Speaking of athletic, Carroll is just that after sitting out a season on Bryant’s bench. Though he’s a bit raw offensively, the 6-7 forward could very well make up some of the rebounding left behind by Pettway.

Pettway’s departure also opens up a big opportunity for 6-5 sophomore Bash Townes, a skilled four who is comfortable both on the perimeter and near the paint. In limited time last season, Townes made more than half of his 2-point attempts and posted an offensive rating north of 100, not an easy feat for a freshman who took on 25% of his team’s possessions when on the floor. If he can continue to progress his fitness and outside shooting, then Townes has a chance to be a breakout star in a league ravaged by turnover.

The size upfront is particularly important, because Bryant’s issues on the defensive end started in the paint last season. The Bulldogs allowed NEC opponents to shoot 51% on two-point attempts during conference play, the second worst mark. A need to pack the perimeter (and having to stay in front of opponents) led to the Bulldogs only forcing turnovers on 19% of their defensive possessions in league play, again second worst. The combination of easy shots and extra possessions helped opponents score 1.03 points per possession, with only St. Francis Brooklyn and Central Connecticut as worse NEC defenses.

(As a side note: there’s a rumor that Bryant may be bringing in another scholarship big – possibly a graduate transfer – in for the 2017-18 season, but nothing has materialized yet on that front. Stay tuned.)

Still, the offense kept Bryant in nearly every conference game. Before getting blown out by 22 points in the NEC quarterfinals against Saint Francis U. the Bulldogs had been competitive in nearly every league game. Six of their nine NEC losses came by three points or fewer or in overtime (Bryant was 1-4 in overtime games last season).

If past history is any guide, O’Shea should be able to find the right pieces to generate an explosive offensive attack. Whether they can get crucial stops will determine if the Bulldogs earn a home quarterfinal game in the NEC tournament.