Harvard and Yale have a lot of similarities. Both are among the nation’s least experienced teams, looking nothing like the squads that played in the last Palestra playoff two years ago. Both rely on athletic, highly touted underclassmen, and their best days are still ahead of them. But as they enter the first Ivy League Tournament, the rivals are going in very different directions.

The Bulldogs were the class of the Ancient Eight for the first month of the season. They opened with a headline-making victory at Washington (before we knew how bad the Huskies would be) and nearly won tough road games at Vermont and Pittsburgh. Yale ran its home win streak to 22 games and looked capable of repeating as Ivy champions — until it lost four straight in February, three at John J. Lee Amphitheater. It finished with a 1-5 record against playoff teams (worst of the four), and the lone win — 68-60 at Penn on Jan. 13 — feels like a very long time ago.

Harvard, on the other hand, has constantly improved since a horrible November. Its 10-4 Ivy record is underwhelming by recent standards, but it had a play to win or tie at the end of all four defeats. The Crimson’s talent is well-documented, and they’ve put it to use, going 17-5 since the start of December.

Watching the two head-to-head matchups — both Harvard wins, by a combined 21 points — it was hard to shake the feeling that the Crimson was just better. But looks can be deceiving. Yale shot a combined 20% from three-point range; bump that up to even a mediocre one-third and both games come down to the wire.

So although Harvard has more momentum — and more importantly, a better efficiency margin and more depth — don’t count out the Bulldogs. A final attribute both teams share is emotion and swagger, so if this game is close late, you won’t be able to turn away. 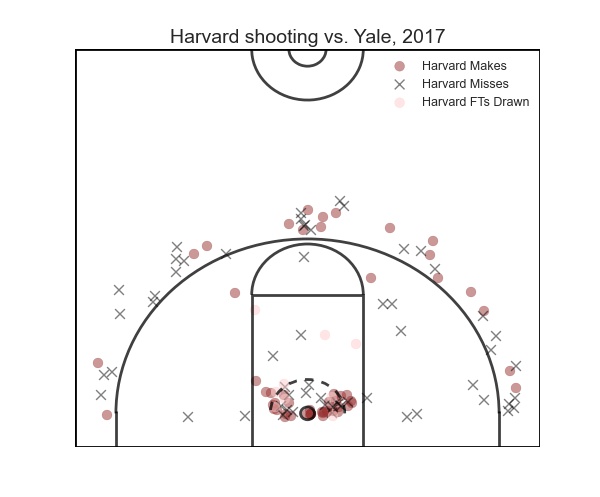 Harvard’s offense is really rolling. The Crimson averaged 1.13 points per possession over the second half of Ivy play, thanks to hot three-point shooting (39%) and a leap forward from Seth Towns (17 ppg). There’s not much new here tactically — it’s the same motion scheme Tommy Amaker has run for years, with a high ballscreen for a speedy playmaker when the shot clock runs down.

The latter action that burned Yale in both of this year’s meetings. Bryce Aiken dropped a combined 49 points — often besting Miye Oni in a fun battle of top rookies (especially when Oni kept going under screens) — and Siyani Chambers totaled 24 points and 13 assists. Yale will need a big game from Trey Phills, its best defensive matchup on Harvard’s quick guards.

After messing with his rotation for a few months (a league-high 11 different starting lineups in 27 games), Tommy Amaker has finally settled into a core that almost always involves four perimeter players. That will give the odd guard a favorable matchup against Yale, which always plays with two big men. The Bulldogs are fine with that; they’ve done this for years, and are comfortable pressing their advantage on the other end. But it means they can’t make careless mistakes, like their frontcourt getting outhustled for a Chris Lewis dunk. They also must avoid foul trouble, with a rotation that all but stops at seven players.

Harvard finished with the second-best defense in Ivy play, allowing 0.99 points per possession. But it had luck on its side — opponents shot a league-low 30% from three-point range and a below-average 70% on free throws. Normalize those, and the Crimson’s defense would be just league-average. The term “rookie mistakes” is so cliché, but it fits: Harvard was a surprisingly poor defensive rebounding team (which led to both Princeton losses), it fouled more than usual, and it blew off-ball assignments too often.

Can Yale take advantage? The Bulldogs take a lot of tough shots, more than any other team in Philly. Sam Downey’s signature move is a contested hook from seven feet or so, one of the toughest shots to master, while Alex Copeland lives on pull-up elbow jumpers. They’re really good at making them — Downey has been the league’s most efficient big man over the last two years, while Copeland is this season’s most improved player — and they kept Yale alive in both Harvard games (40 total points for Copeland, 30 for Downey). But some easier buckets from teammates, ideally three-pointers, would lighten their load.

Ultimately, though, this semifinal might be decided by Yale’s volume of shots more than its accuracy. These aren’t quite the same bully-ball Bulldogs that brutalized opponents for the last 2-3 years, but they can still rebound and draw fouls as well as anyone, taking advantage of Harvard’s weaknesses. Yale’s post-focused scheme is structurally prone to turnovers, however. As a handy rule of thumb, the Bulldogs probably need more offensive rebounds than giveaways to win.

Mascot Battle: I’ve made my feelings on the Crimson “mascot” clear already. Yale has an actual mascot, and a cute one to boot. Huge advantage: Bulldogs.

The Prediction: This matchup is closer than I expected at first glance. The Bulldogs have more downside (a Yale blowout would surprise me; a Harvard blowout wouldn’t), but the most likely outcome is a close, high-scoring game. The Crimson’s offense is firing on all cylinders right now, and it should score as many points as it needs. Harvard 81, Yale 76.