With the 14-game Ivy League season fully in the books, it’s time to unveil our picks for the individual awards. This was the most wide-open year I can remember in several categories, so if you think we’re wrong, you’re probably not the only one.

There are other strong contenders for this award, especially from Cook’s own 14-0 team. But the senior’s two-way impact, over the course of the entire season, was unmatched in the Ancient Eight. Total-value metrics in basketball are imperfect, but Cook leads the league in KenPom’s kPOY rankings and Sports-Reference’s Win Shares, and those ratings probably undersell his contribution to the league’s best defense. Most notably, he stepped up in the biggest games: The senior had 49 points, 13 rebounds and seven steals in two close wins over Harvard — the difference between a shared title and 14-0. 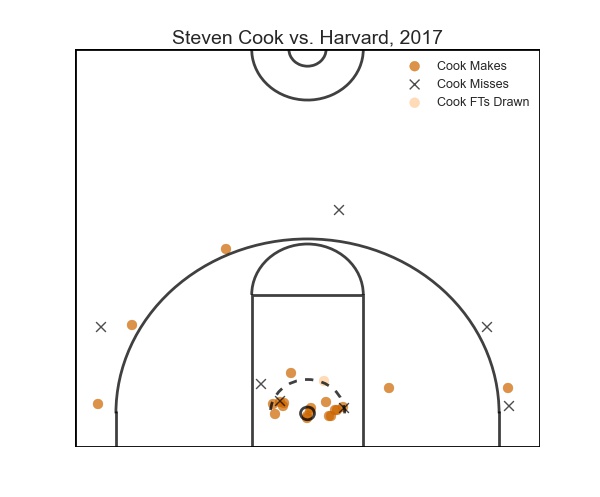 Cook doesn’t fit the usual Player of the Year mold (“ball-dominant scorer” or “unstoppable big man”), but he passes the eye test in other ways. He can create his own shot on the ball or off of it (a must in Princeton’s system), and he’s explosive near the rim. He takes tough defensive assignments, and his length and ball-hawking skills helped fuel Princeton’s rise to the league’s top turnover-forcing team. Watch him secure a close game at Dartmouth with a deflection and save:

Spencer Weisz is such a perfect fit for Mitch Henderson’s offense — he finds backdoor passes, scores in the flow of the offense, and ruthlessly posts up smaller guards. He led the league in steals, with a knack for picking up loose balls and long rebounds. Steven Spieth is best known as his brother’s brother, but he deserves his own notoriety after leading the league in scoring (19.5 ppg). His raw numbers were inflated some by Brown’s fast pace, but he was given more responsibility than ever in his senior year — and he took to it well, setting up teammates and coming a few shots shy of 50-40-90. He led the league by a mile in free throws, getting to the line with ease and knocking down 42 of his final 43 freebies. Myles Stephens wasn’t even a starter four months ago, but his 15.4 ppg in Ivy play led all playoff teams; you’ll read more about him later. (Apparently having some form of “Steven” in your name makes you good at basketball.) Siyani Chambers averaged 5.7 assists per game, 35% better than the field and most in the Ivy League since 2003. True to his reputation, the senior hit plenty of shots in big moments, especially against arch-rival Yale.

For the second straight season, Evan Boudreaux averaged a double-double in Ivy League play, finishing with 18.8 ppg and an even 10.0 rebounds. Given those stats, it’s pretty hard to believe he might not have made an All-Ivy first team yet, but the competition is stiff. (In our defense, we voted for him last year!) AJ Brodeur was the biggest factor in Penn’s resurgence; more to come later. Perhaps no player in the league has mastered the heat check quite like Devin Cannady, a deadly shooter from anywhere on the court: 92% from the foul line (fifth-best in the nation), 42% from three-point range. Plus-minus numbers are inherently noisy, but per John’s analysis, the Tigers’ offense was .16 points per possession better with Cannady on the court, the league’s top mark. Another plus-minus star was Bryce Aiken, who averaged 14 ppg to lead Harvard’s talented freshmen—but his two biggest plays were passes, setting up game-winners at Houston and Cornell. He’s already in Harvard’s Swagger Hall of Fame. Playing in a slower-paced, less-selfish system, Matt Morgan didn’t match the record-breaking per-game numbers he posted as a rookie, but he was just as unstoppable — 18.1 ppg over the full season, with a 59% effective field goal percentage and range out to Buffalo:

Any of the top three candidates would win this award in most years. Ultimately we went with Brodeur, who was Penn’s clear focal point on both ends of the floor — unusual for any player, never mind a rookie. The Quakers’ defense rose from #226 nationally last year to #133 this year (per KenPom), best ever for a Steve Donahue team, in large part because Brodeur was in the paint. He led the league with 2.6 blocks per game, and finished second in defensive rebounds.

On the other end, Brodeur was the go-to Quaker, posting a 25% usage rate over the full season with a 102 offensive rating. He was stellar in Penn’s upset at La Salle (35 points), and he hit big shot after big shot in non-league play. Brodeur was crafty beyond his years at UCF, outmaneuvering 7’6” Tacko Fall several times for easy baskets, and he picked up an occasional three-pointer for the second half of the season.

Princeton was expected to outscore opponents, but instead it became one of the best defensive teams of recent years, holding Ancient Eight foes a hair below 0.90 points per possession. That shift can be traced back to mid-December, when Henry Caruso suffered a season-ending toe injury, pushing Stephens into the starting lineup. Princeton coach Mitch Henderson said last season that Stephens could eventually become the best defender in the league, but surely even he didn’t expect it to happen so soon.

The sophomore’s ability to truly guard positions 1-through-5 unlocked Princeton’s defensive scheme: Switch everything on the perimeter, rotate out of double-teams, and use speed and length to knock passes away. Listed at 6’5”, Stephens held his own against bigger players in the paint, and he was the league’s top shot-blocker for his size:

No Ivy League team had gone 14-0 since Cornell in 2008 — a very different era, when the league wasn’t nearly as strong top-to-bottom. No Ivy League team had gone 14-0 after losing two Opening Day starters since … I have no idea, but let us know if you do. Henderson stockpiled enough talent to shrug off season-ending injuries to Henry Caruso (a returning first-team All-Ivy honoree) and Hans Brase, and still win the league with a +0.22 ppp efficiency margin.

One knock against Henderson was that his teams didn’t win close games, but Princeton went 3-0 in Ivy contests decided on the final possession. Another knock was that he couldn’t beat the best teams, until his Tigers won at Yale and Harvard for the first time this year. Now, the only box left unchecked is to reach the NCAA tournament — a task that is now two games harder.

As if you had to ask…