When Mitch Henderson played at Princeton, it was normal for the Ivy League champion to go undefeated. In his rookie season of 1995, Penn went 14-0, capping a streak of three straight seasons without a loss. Henderson soon got his own taste of perfection, helping the Tigers to unbeaten campaigns in his junior and senior years.

But when he returned to the Ancient Eight as Princeton’s coach in 2011, he found himself in a wholly different league — in particular, a much deeper one, with strong and improving programs beyond Princeton and Penn. But after a 64-45 win at Levien Gym, Princeton is 11-0 in Ivy play, three wins away from the first perfect season since Cornell in 2008.

“It feels a lot harder as a coach,” Henderson said. “The teams that I played on, that was a long time ago. I would never take anything away from that team and the guys I played with, but I think the league is totally different.”

The Tigers haven’t lost since visiting Monmouth on Dec. 20, running their win streak to 14 games on Friday night. (The Hawks are on a 15-game streak of their own in a banner year for Garden State mid-majors.) They held Columbia scoreless for the first six minutes, jumping out to an 11-0 lead and never trailing. The hosts closed within three points late in the first half, but Princeton found its offensive firepower after the break, running off another 11-0 spurt to put the game out of reach.

After making the Ivy League’s longest road trip, Princeton will continue its quest for perfection on Saturday at Cornell, where it will face former assistant coach Brian Earl. The Tigers’ season concludes at Jadwin Gym next week, including a late-afternoon Friday headliner against Harvard, which came closest to knocking off the leaders this year.

In any other season, Princeton would be within striking distance of the NCAA tournament. Instead, the only thing it can secure in the next eight days is the 1-seed in the inaugural Ivy League Tournament. Their potential first-round opponent is still in doubt, but it could be all but decided when Penn (5-6) visits Columbia (4-7) on Saturday. A loss eliminates the Lions, but a win leaves them in decent shape entering the final weekend, while Cornell, Brown and Dartmouth are still mathematically alive at 3-8.

“The tournament this year has changed everything,” Henderson said. “At this time in the season, sometimes you come up against some teams that are mathematically eliminated, and it changes the tenor. That’s just not the case [now].”

1. The Lions had better wear their lucky pajamas tonight. Thanks to its heavy use of zone, Columbia has allowed more three-point attempts than any other Ivy League team this year. That was their undoing on Friday night: Princeton shot 8-15 from distance in the second half, including three treys from Devin Cannady and Myles Stephens in the crucial 11-0 run.

Steve Donahue’s offense is designed to get open three-pointers, so expect the Quakers to take plenty on Saturday. The big question is, will they go in? Penn’s five-game win streak has been fueled by outside shooting (39%, with 10 makes per game), after it fared poorly in its 0-6 start (29%, six per game). Which Penn shooters show up to Levien Gym might determine who plays in the postseason.

2. This is Mitch Henderson’s best defense. Henderson quickly earned a reputation as an offense-minded coach at Princeton, in stark contrast to Sydney Johnson’s defense-first style. It showed in the metrics: While all four of Johnson’s teams ranked higher defensively than offensively (per KenPom), four of Henderson’s first five were offense-dominant, including last year’s squad (#56 offense, #113 defense). But after Columbia managed just 45 points on Friday, opponents are scoring less than 0.90 points per possession against the Tigers, who moved up to #47 nationally in defensive efficiency (#107 offensively).

Their basic formula is one they’ve used before: Length on the perimeter, giving them the ability to switch all positions and close off passing lanes. Princeton had great success trapping speedy point guard Mike Smith on ballscreens, keeping him out of the paint (except for the final 2:30 of the first half, when Smith scored seven of his 11 points). “They switch a lot, so it’s hard to run what you want,” said senior Luke Petrasek, who scored eight points on seven shots.

But this year’s Tigers have a bit more bounce, making them better shot-blocking threats than their predecessors. Myles Stephens is a dangerous defender anywhere on the floor; he sent a Quinton Adlesh three-point attempt into the courtside seats in the first half, after blocking two Miye Oni treys last weekend. Amir Bell swatted a Jeff Coby layup from behind later in the period, and centers Pete Miller and Will Gladson can alter shots. Add it up, and the Tigers have a 9.9% block rate, their best since Kareem Maddox and Ian Hummer were patrolling the paint in 2011. 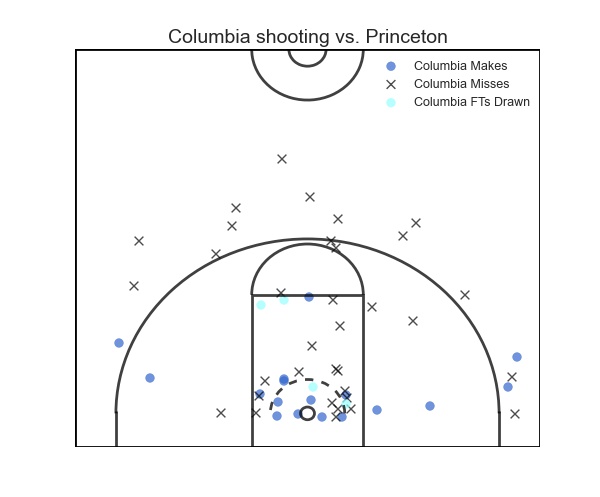 3. Devin Cannady loves Manhattan. Cannady made just one of his first five shots, but Columbia couldn’t contain him for long — the sophomore hit five threes in the second half, from five different spots on the floor, to finish with a game-high 18 points. Still, it wasn’t nearly as spectacular as his first trip to Levien, when he scored six points in the final 11 seconds of regulation to force overtime.

“Offensively, we were moving the ball more, and I was moving so my teammates could find me in open spaces,” he said. “My teammates also made some threes, and we got in the paint against their zone and forced them to go man-to-man, so that definitely helped.”