Last Week in the Ivy League: Princeton survived a pair of scares to stay perfect. Harvard ended Yale’s two-year win streak in New Haven. After homages to The Palestra, the “ZombieQuakers” finally rose. And we reached the halfway point of Ivy play, which means it’s time for our annual per-possession rankings:

All data from Ivy play only unless indicated otherwise

Despite its gaudy record, Princeton has felt the absence of Hans Brase and especially Henry Caruso. The Tigers are battling with Harvard for the league’s best offensive efficiency at 1.08 ppp, but last year’s offensive juggernaut posted 1.14 ppp. The culprits have been weaker shooting in the paint and a lower free-throw rate, both Caruso specialties. Instead, these Tigers score by taking care of the ball and scoring on a lot of three-pointers — which is great when the outside shots are falling, but lends itself to cold streaks, like the second-half droughts that let both Cornell and Columbia back into last weekend’s games.

Instead, Princeton has won 11 straight games thanks to its defense. The silver lining of Caruso’s injury was that it opened up more playing time for Myles Stephens; now that he’s in a full-time role, the do-everything sophomore is a Defensive POY candidate. The rest of the Tigers have tons of experience playing together, and they’re comfortable switching at almost every position, dragging down the shot clock. Defending good centers was their biggest weakness early in the season (and in past years), but this month they’ve started doubling the post at every opportunity, leaving three guards to hunt for passing lanes and rotate like mad.

Defense has been key to Princeton’s wins over the other top-half teams: 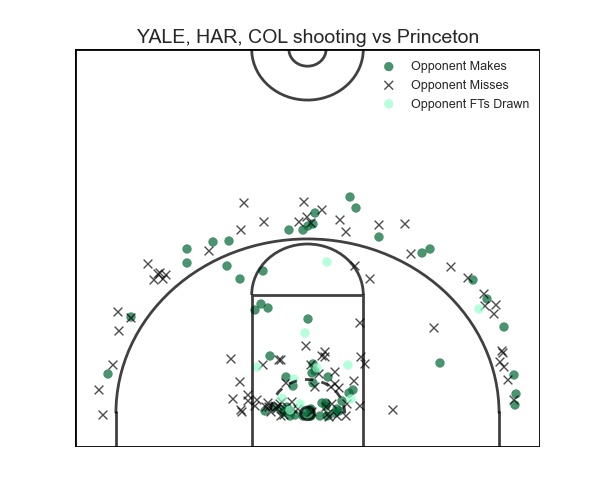 With a 75-67 win at Yale on Saturday, the Crimson took over the title of Princeton’s top challenger. Harvard is one insane play away from being tied atop the league, and only a few more points away from a perfect record. Saturday’s final five minutes were exactly what Harvard fans had hoped to see this year: Siyani Chambers got everything he wanted with the ball, creating all of the Crimson’s points in a 10-2 run to seal a big victory. Bryce Aiken totaled a career-high 27 points in 29 minutes; he’s a leading ROY contender and maybe the league’s best one-on-one creator when the shot clock runs low.

The weirdest split so far: Harvard has been outscored by 33 points in the first half of Ivy games, but it’s +96 in the second half. That’s to some extent a microcosm of the season — after an 0-4 (D-I) start, Harvard has won 13 of 16, with two of the losses to top-100 teams (Vermont and Princeton). It’s no surprise that such a young team has improved since November, but it will need to keep getting better. Ivy opponents so far have made just 30% of three-pointers and 64% of free throws (both league lows), luck that Harvard can’t count on going forward.

The Bulldogs are the league’s most fun team to watch. Alex Copeland is a legit All-Ivy candidate with the ability to get his shot in any situation — an unprecedented leap for someone in a garbage-time bench role one year ago. Jordan Bruner is a high-flying, shot-blocking machine when he’s on the court, and Miye Oni does something gasp-worthy every night:

But how good are they, really? Yale still hasn’t won an Ivy game by more than 10 points (though only thanks to a late garbage-time run by Dartmouth), which does not portend dominance. Turnovers are always an issue for the Bulldogs’ inside-out offense; more surprisingly, they’ve been out-rebounded on a percentage basis in Ivy play. Beating Princeton or Harvard in the next two weeks would be encouraging, but staying healthy is most important — any absence is deadly with a seven-man rotation.

The Lions dropped both games in their southern swing (despite a late rally at Princeton), but their playoff odds remain strong, thanks mostly to the action that took place lower in the standings. Columbia is now two games clear of the field for the fourth seed, and only six games remain. A 3-3 finish would almost certainly send the Lions to the postseason; even 2-4 would leave them in pretty good shape, as long as that includes a home win over Penn on Feb. 25.

There’s real danger of a collapse here. The Lions have forced turnovers on nearly a quarter of possessions, but that’s the only reason they’ve had an above-average defense. If opponents solve that zone the second time through, they’ll find bushels of open three-pointers and offensive rebounds. Columbia has some upside on offense (only 1.00 ppp so far, driven by horrible two-point shooting), but if that doesn’t come it’ll have to keep getting steals — or hang on in a war of attrition for the fourth seed.

The path back to The Palestra is long for Penn, but it still exists thanks to a weekend sweep. After gutting out a win over Columbia, the Quakers showed why expectations were so high a month ago, steamrolling Cornell with a defense-led, 42-14 first half. They’ll need to go at least 4-2 down the stretch, including critical road games at Brown and Columbia the next two weekends, to keep their improbable playoff hopes alive.

After a few weeks of lineup transition, Steve Donahue seems to have found an eight-man group he trusts. Gone are Caleb Wood and Matt MacDonald; in their place are Sam Jones and Devon Goodman, joining Ryan Betley to provide more shooting. (Plus they can always sign up the kid who hit a halfcourt shot for $5000 on Tuesday.) Centers AJ Brodeur and Max Rothschild have played together for longer stretches, and Matt Howard is back in full shape after reportedly being ill last weekend. Defense might be an issue against more sure-handed teams, but there’s no time for the Quakers to turn back now.

Injuries have cost Cornell three members of its Opening Day rotation, leaving it especially thin in the frontcourt. The Big Red has lost four straight games after a stronger start, and I’m a bit surprised to see it have a slightly better efficiency margin than Brown. Per KenPom, it won’t be favored in any of its remaining six games, four of which come on the road.

Some benefits of Brian Earl’s system are already showing: The team is running off three-point shooters well, and Stone Gettings is a prototypical Princeton-offense center. Matt Morgan has become the league’s most dangerous backdoor threat, since defenses have to deny him space on the perimeter. But there are costs as well — namely a 22% turnover rate. This team could actually use a bit more hero-ball, as Morgan remains the team’s most efficient active scorer even on high usage.

The Bears are a joy to watch. They play at the league’s fastest pace and can rip off nine points in a row like nothing. Steven Spieth hasn’t slowed down one bit in conference play, and Tavon Blackmon runs a great offense. Lots of points come from the free-throw line, usually a recipe for bogged-down games, but Brown’s sets make it worthwhile. Watch this play that frees Spieth for a backdoor dunk, expertly crafted and executed to take advantage of Harvard’s weakness:

The defense just isn’t there. The Bears have forced more than their share of turnovers, but on all other possessions they’ve surrendered a whopping 1.42 ppp (Columbia is next-worst at 1.32; Princeton best at 1.17). Brown has been bad defensively in the past two seasons with better rim protection, so there’s no reason to expect a turnaround at this point — their only path to the postseason is to outscore everyone in sight.

Not to look too far ahead, but I’m really curious what the next generation of Bears looks like. Spieth and Blackmon will be huge losses, but will the Okolie-Howard-Anderson-Fuller core make up ground defensively?

After the sky was falling two months ago, Dartmouth has somewhat turned its season around, winning two of its last three games to join a crowded bunch tied for fifth place. With four more home games ahead, the Big Green’s momentum might continue until a brutal closing stretch (vs. Yale, at Penn, at Princeton). Evan Boudreaux is in peak form, going for 20 and 10 in three of his last five games. In a league without a clear POY frontrunner, Boudreaux (like Spieth) will have an interesting case with eye-popping numbers from a lower-division team.

But Boudreaux isn’t a difference-maker on defense, where the Big Green sorely needs one. (Even in their two Ivy wins, they allowed at least 1.07 ppp.) Under Dave McLaughlin, they have the league’s lowest steal rate, and they’re also last in blocked shots. That’s not a good combination.

As on the men’s side, there’s a clear top three here. After a rough non-conference season, Penn (7-0) has looked like the team that was unanimously picked to win the Ancient Eight. Nobody doubted the Quakers’ defense, but they’ve also had the league’s most efficient offense (1.08 ppp), masked by a glacial 62-possession pace. Lauren Whitlatch’s torn ACL has forced Mike McLaughlin to go (slightly) deeper into his rotation, and reserves such as Princess Aghayere have stepped up. Princeton (5-2) has fallen off its torrid per-possession pace from past years, and Harvard’s (6-2) 16-game win streak has ended, but both have a comfortable path to a likely head-to-head meeting at The Palestra in March

Cornell (3-5) is the only other team with a positive scoring margin, but it hasn’t shown up in the standings. After close losses to Princeton and Penn this weekend, the Big Red is two games out of a playoff spot; their path to a comeback all but requires at least one win over a top-three team, with the best bet coming against Harvard this weekend. Instead, Brown (5-3) has the inside track to a playoff spot, thanks to a breakout season by rookie Justine Gaziano (19.3 ppg in Ivy play). Even if the Bears stumble, they’ll likely control their playoff destiny heading into the season finale at Cornell. Yale (2-6) has four home games to make a run, but the first three are against Princeton, Penn and Harvard. Columbia (2-6) already has more Ivy wins than last year, thanks to Camille Zimmerman’s 25 ppg. Dartmouth (1-7) brings up the rear, but all but two losses came by single digits.