Earlier this week, we published our picks for the Ivy League individual awards, and the conference announced its official selections. But I’ve been compiling shot location data for every team throughout Ivy play, which has allowed me to hand out some new extra-special bonus awards. These are the trophies that aren’t awarded in primetime, the small font that scrolls by before the commercial break. Presenting, the Shotties.

But first, here’s where every shot in Ivy play was taken this season:

(Note that all charts here include conference games only)

By my count, Ivy League players attempted 37 shots from 26 feet or further this season (excluding unsuccessful end-of-half heaves). Eighteen of those — nearly half! — were launched by Morgan, a rookie with the green light to shoot from anywhere. Next on the list is Jackson Donahue, with five; nobody else shot more than two. Morgan made one-third of those attempts, even with his season average on all three-pointers. He used up more real estate on the court than anyone else: 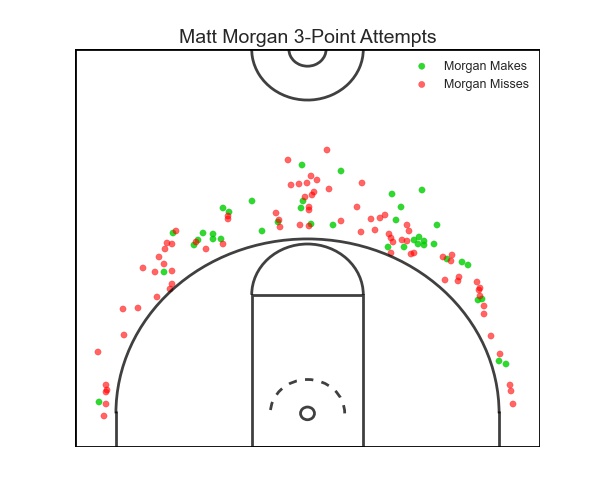 The “Paint Is Made Of Lava” Award: Corbin Miller, Harvard

In two seasons since returning from a Mormon mission, Miller has taken over the role of former teammate Laurent Rivard as Harvard’s designated sniper. The junior actually increased his share of two-point shots this year, but most of them were pull-up jumpers from a step or two inside the arc. 97% of his attempts this season came outside the paint, leading the league ahead of Penn’s Sam Jones and Brown’s JR Hobbie. (At the other end of the spectrum, Darien Nelson-Henry took less than 2% of his shots outside the paint.) Unfortunately for Harvard, Miller slumped in Ivy play, shooting just 25%.

You already know who scored the highest share of his points in crunch time — it’s Princeton’s electric rookie. 24% of Cannady’s made baskets came in the final five minutes of games, the highest in the league (min. 10 makes). Cannady sparked memorable comebacks against Princeton and Columbia, and he was efficient in the clutch, shooting 13-24 in those situations while getting to the foul line several more times.

Sherrod famously spent last year traveling with the Whiffenpoofs, but you don’t forget how to dunk. The Yale senior certainly didn’t, throwing down a league-high 12 jams in Ivy play. (Justin Sears and Zena Edosomwan could have beaten Sherrod, but each missed multiple slams, costing them the dunk title.)

Sherrod also led the league in free-throw rate, attempting almost as many shots from the free throw line as from the field. (For the full season, his free-throw rate of 80.4 ranked 10th nationally.) Most of his whistles were drawn near the rim:

Without doing too much research, I’m confident Smith is the least likely field-goal percentage leader in Ivy League history. Most years, the most accurate shooter is a center who stays close to the rim (like Sherrod, who finished second this year). But Smith made 68% of his shots despite taking them from everywhere. He ranked fourth in shooting percentage in the restricted area (78%), second from 4-10 feet (71%), second from 10-20 feet (58%), and first from three-point range (63%) among players with as many attempts. And his accuracy came out of nowhere — he shot below 45% in each of his first two seasons. For the full season, Smith posted the best effective field goal percentage of any Ivy player in at least two decades.

Mason made 14 shots from 10-20 feet in Ivy play, edging Matt Morgan for the league lead. He wasn’t especially accurate — shooting only 33% from that range — but he was clutch: One of the made shots forced overtime against Dartmouth, and five more came in the NCAA tournament-clinching win at Columbia. Mason presumably takes the two-point jumper crown from former teammate Matt Townsend. 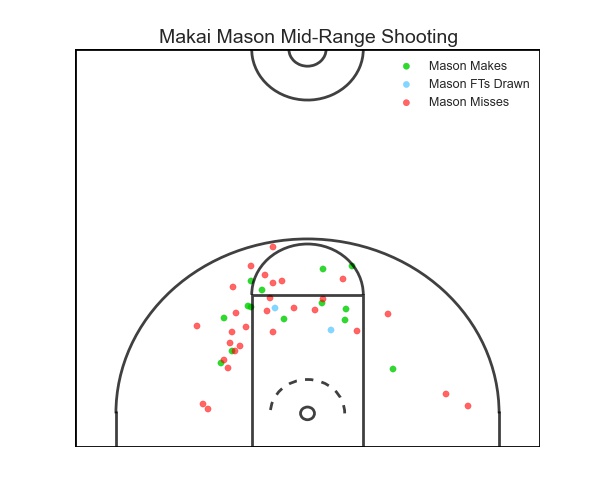