Welcome to the preseason, where everyone is healthy, the league is stronger than ever, and all the teams play faster than average. 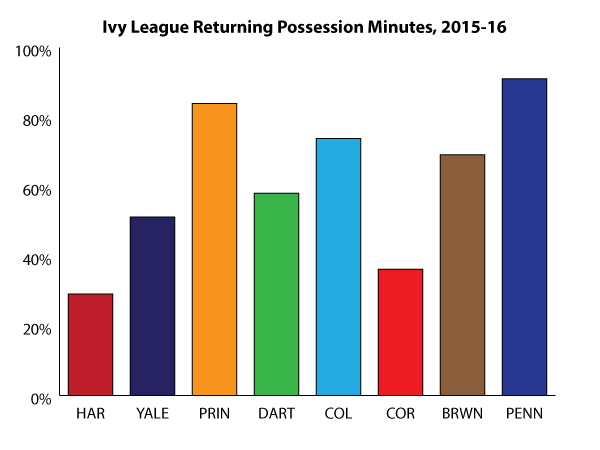 Penn returns 91% of last year’s possessions, the highest share in the Ivy League, followed by Princeton at 84%. Columbia gets a bit of an asterisk, since RPM does not reflect the return of Alex Rosenberg and Grant Mullins, who missed the entire 2014-15 season with injuries.

Harvard returns less than 30% of possessions from last year’s NCAA tournament team, because…

1. With a former Player of the Year and the reigning Defensive Player of the Year graduating, 2015-16 was always going to be a transition season for Harvard. That became even clearer in September, when the team announced that Siyani Chambers will miss the season with a torn ACL. (He withdrew from school to preserve eligibility for 2016-17.) Without Chambers, the Crimson will have to rely on unproven players, including center Zena Edosomwan and freshman point guard Tommy McCarthy, making them a long shot to reach March Madness for a fifth straight year.

2. Columbia’s Maodo Lo played with the German national team at this summer’s Eurobasket, taking feeds from Dirk Nowitzki and sharing the backcourt with Dennis Schroder. Lo grew his production throughout the tournament and scored 14 points in a one-point loss to eventual champion Spain. The stage gave Lo some national recognition: He was ranked #79 on CBSSports’ top 100 players — but he might not even be the league’s Player of the Year favorite, with Yale’s Justin Sears back to defend his crown.

3. Tommy Amaker reloaded the Crimson for future generations, securing commitments for an astounding Class of 2020. Top 100 forward Chris Lewis, who committed in January, was joined by forward Robert Baker, point guard Bryce Aiken, and wing Seth Towns, all four-star prospects on at least one scouting service, plus three-star recruits Justin Bassey and Henry Welsh. ESPN has Harvard’s recruiting class rated eighth nationally, though some power-conference prospects have yet to commit.

Towns, like your typical Top 150 recruit, explained his decision to Bleacher Report by quoting Ralph Waldo Emerson. Harvard fans should be glad he isn’t a fan of fellow Transcendentalist Henry David Thoreau instead, or he would’ve chosen the most remote, isolated destination possible (Dartmouth).

The Ivy League has almost always had one or two dominant favorites, but there’s no consensus at the top this year. National writers like Columbia. Fans and statistical models like Princeton. Yale is atop the league’s official media poll, but the top three teams split 17 first-place votes as evenly as possible. Here’s my take: