What Happened Last Week: Harvard lost at Cornell, falling back into a tie for first place with Yale at 10-2. The Crimson beat Columbia the following night, while the Bulldogs beat Princeton and Penn despite trailing both in the second half. Dartmouth earned an impressive road sweep of the New York teams.

1. There’s a paradox inherent to the data-driven analysis we like to focus on at this site: The most interesting stories for us to write about are the most extreme trends — which are also the least likely to continue. I was thinking about this while writing about the dramatic improvement of Harvard’s offense; sure enough, hours after that analysis was published, the Crimson was held under 50 points at Cornell. I wrote about Cornell’s low defensive turnover rate right before the Big Red started forcing a lot more miscues; I wrote about Siyani Chambers’ rough statistical season at its nadir; and I wrote about Justin Sears’ Ivy dominance just before his tough night against Harvard. These are all reminders that even if a trend is notable, it won’t necessarily continue.

Still, my Harvard-jinxing powers seem remarkable — you may recall my deep dive on Wesley Saunders presaged a 76-27 loss at Virginia. I’m just saying, if Yale fans are willing to bribe me to write another Harvard feature this week, I might listen.

2. Friday night at Columbia, Dartmouth had its hottest stretch since it shocked Harvard in January. After the Lions pulled even midway through the second half, they were flattened by an 18-4 Dartmouth run that spanned just seven possessions. Many of the biggest contributions came from the Big Green’s bench: Malik Gill sparked the spurt with a steal, scored six points and assisted two of the other baskets, while Tommy Carpenter added a putback and a crafty assist as part of a 10-point, seven-rebound game off the bench.

3. Any fans arriving in a time machine from the 1990s would have been surprised by Friday night’s highlights. First, in the second half of a tied game, Yale ran a 25-foot alley-oop lob to 10th-leading scorer Khaliq Ghani (all videos via Ivy League Digital Network):

A few minutes later, Steven Cook answered with an emphatic jam off the dribble, undeterred by the presence of Justin Sears (who was adamant that he was not “dunked on”):

Player of the Week: Maodo Lo, Columbia — Lo regressed from last weekend’s heights, scoring ‘only’ 48 points across two losses to Dartmouth and Harvard. He shot just 4-13 against the Big Green, but he rebounded to drop 33 points on 23 shooting possessions against the league’s best defense, adding five steals for good measure. Lo was a pedestrian 3-9 from beyond the arc, but he used his speed and several backdoor cuts to get into the lane frequently: 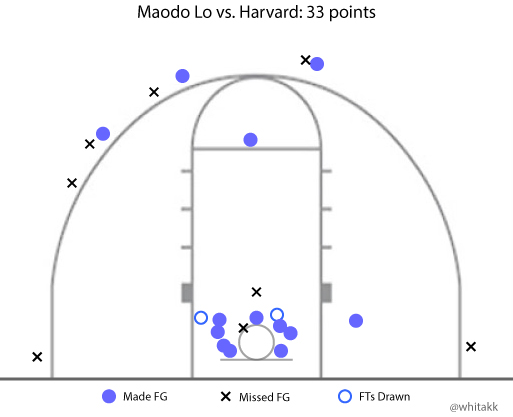 Rookie of the Week: Antonio Woods, Penn — Woods helped Penn scare Yale on the road, scoring or assisting on more than half the Quakers’ points. For the weekend, he scored 29 points and had 14 assists against five turnovers, bringing much-needed stability to the Quakers’ backcourt. After struggling to find his footing at times early in the season, Woods has the league’s third-highest assist rate in Ivy play (34%) while leading the Quakers in minutes.

The Week Ahead: Yale at Harvard, 8 p.m. Friday, in the biggest game of the year. The winner will clinch at least a share of the Ivy League title and will be able to secure the NCAA bid with another win in the season finale. Saturday’s action won’t be just a formality, however, especially if Yale wins — the Bulldogs still have to visit Dartmouth, where they are currently just a one-point favorite per KenPom.

"@IvyHoopsOnline: Lo picks up his fourth foul on a charge and Dartmouth still leads by 12. Big Green looking golden.”

I LOATHE Sweet Child of Mine. Penn band will pay for that transgression. #DartMBK